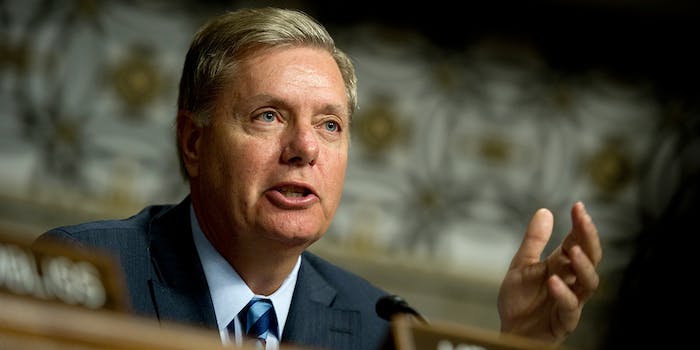 Chairman of the Joint Chiefs of Staff/Flickr (CC BY 2.0)

It's an illustrious history.

By claiming he’d never sent an email, Sen. Lindsey Graham (R-S.C.) this week sent shockwaves through all but the most hardened cynics in American politics.

“I don’t email,” he told Meet the Press’s Chuck Todd on Sunday. There was little question of what he meant. “I’ve never sent one,” he added. He has since reiterated that stance, though he says he texts, and “I’ve got iPads.”

The 59-year-old Graham, who’s been in Congress since 1995, is definitely in the minority. A 2011 Pew study found that 92 percent of American adults use email. But that percentage, which surely has increased in the past four years, gets even higher as you hone in on Graham’s demographic. Ninety-three percent of whites—Graham is white—used it, the study found, as did 96 percent of college graduates and 98 percent of those who make at least $75,000 a year. Graham’s estimated net worth in 2009 was $834,812; other sources have since put that estimate at nearly twice that.

So if this likely presidential candidate has never used email, it’s worth looking at choices he’s made as a legislator, knowing now that he hasn’t—or at least he claims he hasn’t—ever sent the most basic and widespread form of online communication.

.@ChuckGrassley you recognize this guy? I ran into him at the Iowa State Capitol yesterday. @PatGrassley pic.twitter.com/TVoIsyhmNl

.@SenatorTimScott and I great time meeting with South Carolinians in DC today for the #MarchforLife2015. pic.twitter.com/camBCalC1R

Graham’s office didn’t respond to the Daily Dot’s query of whether he’s actually ever personally tweeted from those accounts.

Graham currently sits on the Senate Subcommittee on Privacy, Technology and the Law.