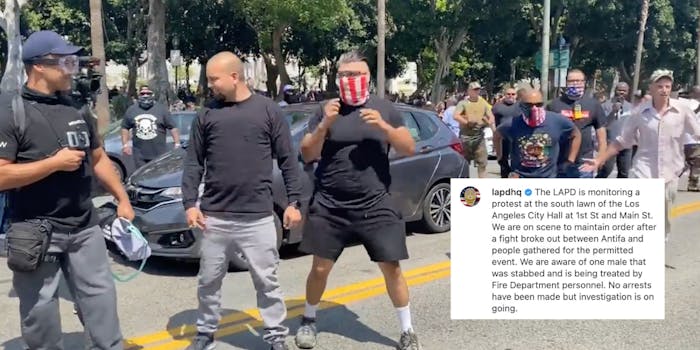 Accounts from the ground refute the LAPD's version of events.

The Los Angeles Police Department is facing scathing criticism after a social media post framed a clash at a “medical freedom” protest as between “Antifa and people gathered for the permitted event.”

Hundreds of people showed up at City Hall in downtown Los Angeles on Saturday to protest vaccine mandates. They carried signs against vaccines, against masks, and in support of Donald Trump. Dozens of counterprotestors showed up in response, and some violent clashes occurred.

One video taken by a journalist shows a bunch of men screaming “fuck antifa” lining up and eventually charging at the counterprotestors, punching, kicking, and trying to rip their masks off and destroy their property. At least one person involved was identified as a member of the far-right Proud Boys.

At some point during the “protest,” reporter Frank Stoltze says he was assaulted by a group of men. The Los Angeles Times reported that anti-mask protestors were seen screaming and kicking at him, and that he told police officers he was assaulted while attempting to conduct an interview.

Another man was transported to the hospital after being stabbed during a clash between protestors and counterprotestors, AP reports. It is not immediately clear who enacted the violence against this person, although several accounts from the ground claimed the Proud Boys were stabbing people.

Despite multiple reports from people on the ground that the Proud Boys were there and instigating violence, the LAPD opted to word their Instagram remarks about the clashes in a way that suggested antifa was to blame—and didn’t acknowledge the reported presence of Proud Boys while painting the anti-mask protestors in a neutral light.

“We are on scene to maintain order after a fight broke out between Antifa and people gathered for the permitted event,” reads the Instagram caption.

The apparent bias and misleading remarks sparked outrage among Angelenos, but some aren’t at all surprised that the LAPD would try to spin things in this manner.

“LAPD is currently on Instagram blaming the fight on ‘Antifa,'” wrote @PplsCityCouncil. “Which is funny because right before the right wingers shouted ‘FUCK ANTIFA’ before attacking counter protestors.”

The LAPD was similarly blasted by people who claimed officers didn’t do anything to stop violence from the Proud Boys when it was happening right in front of them. The incident intensified the beliefs among some folks who say the LAPD needs to be defunded because they aren’t actually serving and protecting.

Interestingly, the LAPD Twitter account made no mention of antifa in an otherwise identical post to the one on Instagram, writing simply that “a fight broke out”—although the difference may simply be a result of the Twitter character limit not permitting the additional placement of blame on antifa.

The Daily Dot reached out to the LAPD about these post discrepancies and the reported presence of Proud Boys at yesterday’s rally.