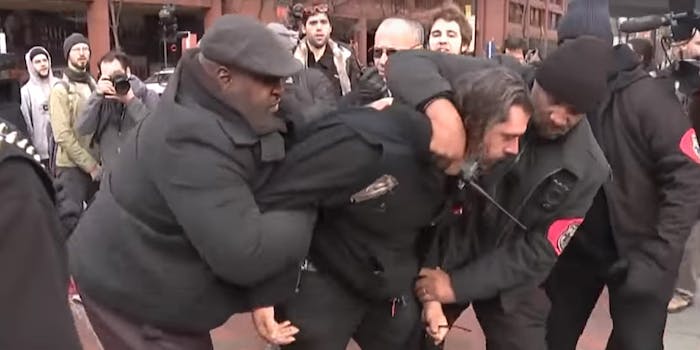 Anti-fascists (and even Gritty) managed to make the alt-right's flight a little more frustrating.

It’s hard enough to get a cab in a big city. Even harder when you’re a willing member of the violent, alt-right group the Proud Boys. Philadelphia cab drivers refused to give rides to members of the white nationalist Proud Boys after the group participated in a rally on Saturday, where they were apparently outnumbered by counter-protestors.

Vice News reporter Tess Owen tweeted footage of a Philadelphia taxi driver driving away from a pickup area created by local law enforcement without a passenger inside.

This is completely surreal. Fascists are trying to take taxis , but the drivers keep leaving whenever they realize what’s happening. pic.twitter.com/lcwPucpSPf

“This is completely surreal,” Owens tweeted. “Fascists are trying to take taxis, but the drivers keep leaving whenever they realize what’s happening.”

Owens reported that police were attempting to assist members of the Proud Boys in leaving the area by organizing taxis and Uber rides. According to Owens, whenever a car would pull up to pick up a Proud Boy member, “protesters would swarm and tell the driver they were about to pick up fascists, and the Uber would speed off.”

The Proud Boys were gathered in Philadelphia for a “We the People” rally advertised on a similarly named Facebook page. The event page reads, “the Silent Majority must make a stand now!!! This is our time!! This is our day.”

Protestors included members of the Proud Boys, as well as members of the “3 Percent,” a militia group whose members pledge to fight (potentially with the use of firearms) against attempts to destroy constitutional rights. Members of the 3 Percent group recently made headlines for threatening violence if Democratic candidate Stacey Abrams won Georgia’s midterm election.

According to ThinkProgress, the protestors included David Kuriakose, a Proud Boy facing riot and assault charges from an October fight with anti-fascist protestors in New York City.

Police arrested four individuals at the rally, mostly for disorderly conduct and failure to disperse.

Counter-protestors seemed to largely have fun at the Proud Boys’ expense, including making signs featuring Gritty, the new Philadelphia Flyers mascot who’s become an odd symbol of sorts for the anti-fascist movement.