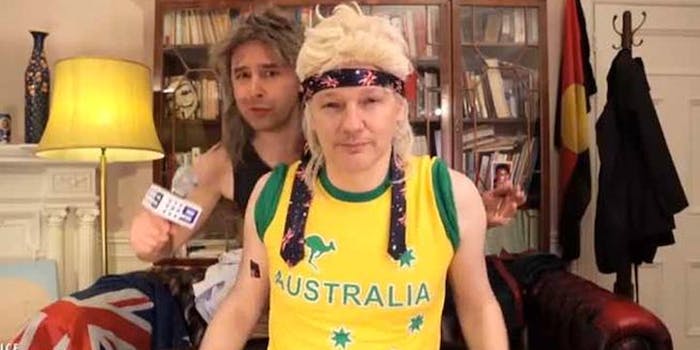 The WikiLeaks founder's chances of winning a Senate seat are slim after a major political misstep.

There’s an old saying in politics: Never interfere with your enemy when he is destroying himself.

Former Australian Prime Minister and Julian Assange nemesis Julia Gillard must be giddy with delight this week, because the WikiLeaks Party is currently bleeding profusely from several entirely self-inflicted wounds, and it’s not clear if even Assange’s recent YouTube power ballad going viral can save it now.

WikiLeaks has long supported the Pirate Party around the world, and with their increasingly political role (and political victimization), they finally made the jump to forming their own political party earlier this year. Assange’s run for Australian senate is its first campaign.

So far, so good; the public seemed supportive of the measure, and the new party gained considerable support from non-mainstream parties, including the presumably rival Pirate Party. Polls indicated Assange would win his riding handily, and that the party would have a credible, if not menacing, showing at the voting booths. Ah, but that was then. Now is a considerable sight uglier.

In Australia, parties declare what they think of other parties in public, in writing; this is the so-called Preference system. Preferencing tells you about each party (“By their friends shall ye know them”) in an indirect yet telling way, and is a basis for coalition forming and sometimes where backroom alliances are first made public. On August 18, the world discovered that the WikiLeaks party had preferenced, ie ranked higher, the far-right Australia First party, over their longtime allies the Greens.

Think of it as Edward Snowden making a campaign appearance for Dick Cheney. Yeah, that bad.

As explained on the Blogotariat blog:

“In official election tickets lodged with the Australian Electoral Commission, they have said they want the fascist Australia First Party, the pro-shooting-in-National-Parks Shooters and Fishers Party , and the “mens rights activist” Non-Custodial Parents Party to win a seat instead of the Australian Greens. In New South Wales, if you take the easy option and just tick the WikiLeaks Party box in the Senate, and if they don’t win, your vote will go to those three right-wing parties before it goes to the Greens.”

It didn’t help that two days prior, Assange (who frequently describes himself as a libertarian) had been quoted expressing admiration for Ron and Rand Paul, immediately calling into question his own views on race, women’s rights, and many other fraught subjects.

The result: The Greens attacked the party and distanced themselves from it, quite possibly forever. Dan Mathews, a personal friend of Assange’s for decades and a co-founder of WikiLeaks, resigned from the WikiLeaks party. With him went Assange’s running mate, Leslie Cannold, and four other high-profile members. Popular performer and YouTube star Sean Bedlam said “The party must die. It is broken. It can’t be allowed to continue,” when he announced his resignation. Bedlam, ironically, appears in the same episode of Juice Rap News as Assange’s mulleted 80’s power ballad.

Then came the excuses.

“Administrative error.” That one didn’t pan out (realistically it never could have) and leaks from within the party itself, combined with privacy campaigner and Pirate Party activist Asher Wolf’s assistance at identifying at least one source of the various excuses, quickly buried it amid a flood of scorn. Some tried to claim the New South Wales division had “gone rogue” but that was debunked when the leavers told their stories: it had apparently been a decision by Greg Barnes, national campaign director for the party. The WikiLeaks Party’s attempts to spin the situation as good for the Greens also didn’t help matters.

WikiLeaks has been busy, denying Assange supports the Pauls’ stance on abortion, and trying to get the news out that membership is actually rising. Wednesday morning, Assange himself disparaged the Senate in an interview, saying it had “become a place of deals,” rather than of political oversight. If so, his own party needs to get better at deal-making, and quickly, if they’re to survive the upcoming elections.on September 7.