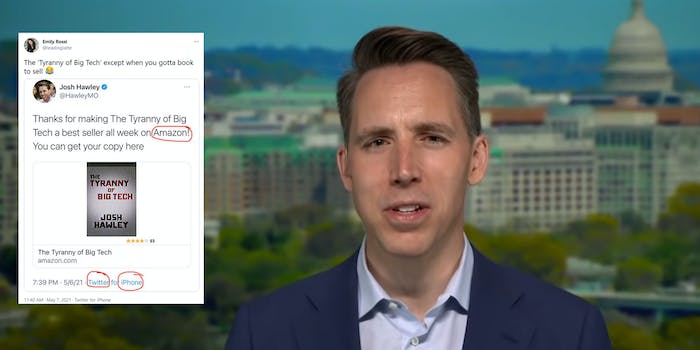 The irony was not lost on many people.

Sen. Josh Hawley (R-Mo.) has made a name for himself since being elected for railing consistently against big tech.

He’s obviously not alone in Congress in being critical of tech companies, but it’s become one of his schticks. In fact, he wrote a book about it: “The Tyranny of Big Tech.”

Given his consistent criticism of the tech companies, many people online found it extremely humorous that he used his iPhone (owned by Apple) to tweet (on Twitter) about his anti-big tech book being a best seller on Amazon.

“Thanks for making The Tyranny of Big Tech a best seller all week on Amazon! You can get your copy here,” Hawley tweeted on Thursday night.

The tweet, which is now pinned to the top of his Twitter profile, has been mocked for the irony of him celebrating that his book has become popular on one of the biggest big tech platforms out there, Amazon. Not to mention he used Twitter to promote that fact and sent the tweet from his iPhone.

But they were far from the only ones who pointed out the irony.

“My book, “The Tyranny of Fast Food”, is sweeping the nation, buy a copy today at your local McDonald’s!” another Twitter user chimed in.

Hawley could easily say that he has little to no choice but to use the big tech platforms to sell and promote his book, but he didn’t. And there’s no denying the irony here.