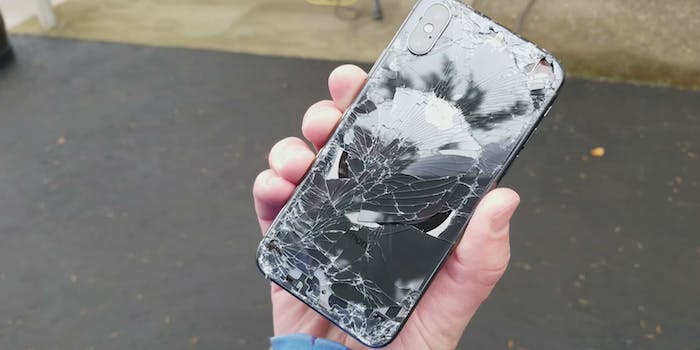 The iPhone X is the most breakable iPhone ever

The evidence is conclusive.

Apple’s most beautiful (and expensive) iPhone yet is also its most fragile.

Several reputable tech publications tested the iPhone X’s durability by subjecting it to a series of brutal scratch and drop tests. The verdict across the board is that the front and rear glass panels on the $1,000 flagship phone are extremely easy to shatter, despite Apple’s claim that it’s “the most durable glass ever in a smartphone.”

The first test comes from CNET, which dropped the iPhone X onto a sidewalk from just three feet, or about pocket height. The phone suffered damage to three of its four corners on the very first drop. The cracks on the screen spread deeper and wider on the second drop from the same distance. Because of those poor results, CNET gave the device the dubious honor of “most breakable iPhone ever.”

A few days later, electronics warranty provider SquareTrade uploaded a short drop test to YouTube. The iPhone X’s OLED display shattered and malfunctioned after being dropped onto its stainless steel side from six feet high.

The face-down drop was even worse. Cracks spread across the lower half of the screen, and again, the display malfunctioned, making the phone unusable. SquareTrade gave the iPhone X a breakability score of 90, or “high risk.”

To make matters worse, the iPhone X is extremely expensive to repair. SquareTrade estimates the screen replacement would cost $279, while any further damage could bring repair costs beyond the price of a new iPhone 7.

Our advice? Save another $20 and get yourself a good case and screen protector.