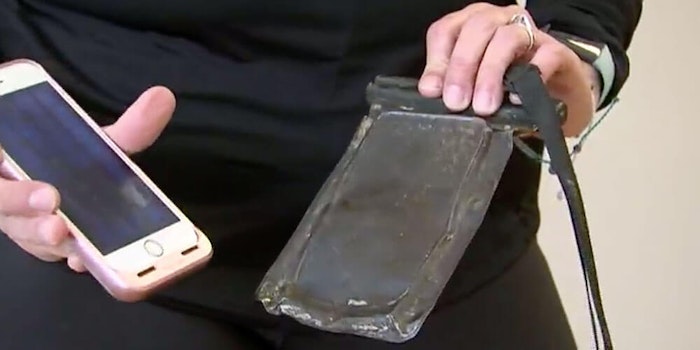 The owner says the phone contained texts from her late father.

An iPhone discovered by a diver in South Carolina this week still works more than a year after it fell to the bottom of a river.

Located by diver Michael Bennett in a video for his YouTube channel “Nugget Noggin,” the iPhone was protected by a waterproof case despite spending over 12 months in the Edisto River.

“I came across something that looked kind of like a rope maybe attached to car keys, and when I pulled it up, I seen a phone inside of a waterproof case and I’m like, ‘No way, this is unbelievable,’” Bennett told local news outlet WDAM 7.

To Bennett’s surprise, the phone still worked. The YouTuber then undertook the seemingly impossible task of locating the phone’s owner.

“We charged the phone,” Bennett said. “When it turned on, it had a passcode, so you couldn’t get inside.”

The diver eventually learned the identity of the iPhone’s owner by placing the phone’s SIM card into another device, allowing him to see the woman’s contact information.

That woman, Erica Bennett, had dropped the phone in the water in June of 2018 while on a trip with her family.

Little did the diver know, Erica’s phone had sentimental value for her given that it contained her late father’s final texts.

Although the screen’s brightness had been affected by the incident, Erica was still able to see the texts after having the phone returned to her.

“It was kind of emotional because the last thing I have from him is saying, ‘Hey I’m playing phone tag with you, so I just figured I just text you, how are you feeling?’ And I think he had called me after that,” she said. “I’m pretty sure it was Father’s Day.”