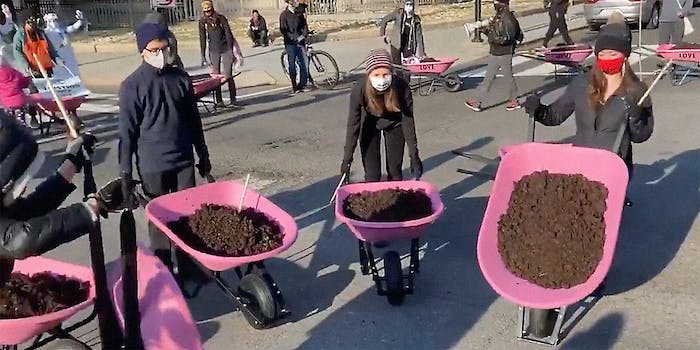 'Do they think Biden is going to look out the window, see a pile of manure, and think 'Oh my I haven't done enough'?'

Earth Day helps provide an opportunity for environmentalists to get the attention of people who don’t spend each day filled with dread over the climate crisis.

In the two years since its founding, advocacy group Extinction Rebellion has developed a knack for standing out in a crowded field with internet-ready stunts like die-ins and gluing themselves to a bank to protest its investments in fossil fuels.

This year, Extinction Rebellion’s Earth Day stunt at the White House is drawing criticism and laughter from all sides.

To many, it’s bullshit. Literally.

This morning, a group of Extinction Rebellion activists dumped wheelbarrows of cow manure on the street in front of the White House. They then planted a sign in the pile that read, “Stop the bullshit.”

A spokesperson told the Washington Examiner that they are protesting President Joe Biden‘s plan to cut United States’ emissions by 50% below 2005 levels in the next nine years as “too little, too late.”

“We need net-zero carbon emissions by 2025,” they reportedly said. “Anything else guarantees climate destruction and nails the coffin shut for millions across the globe.”

Even people inclined to support Extinction Rebellion were unimpressed.

“It’s like, PROTEST the PEOPLE who are AGAINST any change at all to our climate policy,” tweeted @ConcernedFruit. “Dump manure in front of Mitch McConnell’s house or Kevin McCarthy or any of their fellow ass clowns. Biden is TRYING!”

“They obviously don’t know how hard it is to find right now,” commented one person in a nod to the pandemic-inspired gardening craze.

Others opined that it’s kind of hypocritical for environmentalists to litter and said their bright pink wheelbarrows and plastic receptacles aren’t exactly environmentally friendly, either.

“Why are they wasting compost? Doesn’t seem like a ‘green’ thing to do,” tweeted @heiretik.

The presumed race and socioeconomic status of the activists also drew unflattering commentary.

This isn’t the first time Extinction Rebellion has trafficked in poop. In 2019, they dumped a load of crap in front of Ontario Premier Doug Ford’s constituency office.