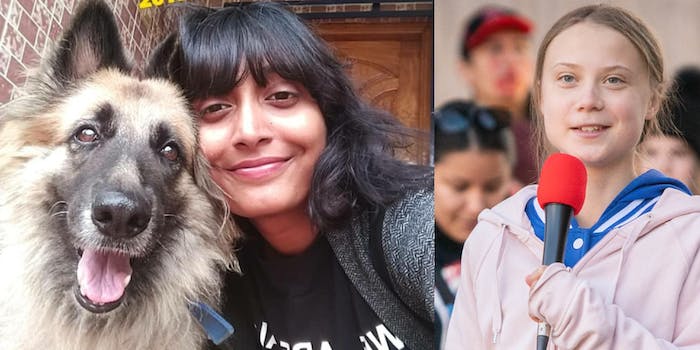 Police reached out to Google, Twitter for information before arresting 22-year-old climate activist

Meanwhile, Twitter won't take down tweets calling for her destruction.

Police in India reportedly requested Google and Twitter give access to information about emails and social media accounts on those involved with a “toolkit” about ongoing farmer protests in the country—including local activist Disha Ravi, a 22-year-old who was arrested over the weekend.

Their inquiry towards Ravi was initiated after teen climate activist Greta Thunberg got involved in a massive farmer protest earlier this month, when she tweeted in support of the farmers and shared a “toolkit” designed to help spread the word. It’s become the subject of enormous controversy since it was released.

Following Thunberg’s tweet, opponents of the protest, including local celebrities with millions of followers, began tweeting the hashtag #IndiaAgainstPropaganda. That sparked a massive online campaign against the two women.

The “toolkit” in question has become a central conversation in the Indian government’s targeting of both Thunberg and Ravi. Many who are against the protesters have condemned it as “propaganda,” supposedly an attempt to start a “social, cultural and economic” war against India, with many even claiming it’s an international conspiracy.

However, local progressive media have reported the toolkit is a set of peaceful actions, like protesting outside Indian embassies and guides to using Twitter.

Following the backlash against the toolkit, police reached out to the respective tech giants for information on those behind the toolkit, according to India Today.

Ravi, founder of the local faction of Fridays for Future, has said she only edited a couple of lines of the document—but police believe she shared the alleged Google Doc with Thunberg. She was arrested on Sunday.

After arresting her, the Delhi Police touted their move, referring to her a “editor” and “key conspirator” of the document:

“She was the one who started the Toolkit Doc with Greta Thunberg,” read a follow-up tweet.

“Whoever has seeds of anti-nationalism in their mind has to be destroyed from the roots, be it #Disha_Ravi or anyone else,” a state minister tweeted on Sunday, according to a translation by local news outlet the Wire.

He then followed that up with a note from Twitter that read it would not be taking any action.

“We have investigated the reported content and have found that it is not subject to removal under the Twitter Rules or German law [where the complaint was filed],” read a part of the email. “Accordingly, we have not taken any such action as a result of this specific report.”

According to Twitter’s rules, users are not allowed to threaten violence against any individual or a group; the Daily Dot has reached out to Twitter seeking clarification about the minister’s tweet and the violence it called for.

When the Daily Dot contacted Twitter on Tuesday, the tech company refused to respond to any of the queries about the minister’s tweet, or about providing information to Indian police, and instead just referred us to a statement from February 10, explaining their reasoning for blocking certain tweets after they received “blocking orders” from the Indian government.

Meanwhile, opponents of the farmer protest in India, including some local media, have tweeted supposed leaked chats between Thunberg and Ravi, which Indian police have apparently shared.

Some news reports seem to be reveling in what was a moment of fear and doubt on Ravi’s part, who allegedly asked Thunberg to lay low after tweeting out the toolkit. A national news organization reported that Ravi allegedly “coaxed” Thunberg to act on the agenda of the toolkit, which she shared with her via Telegram.

However, no further evidence by the police has been made publicly available showing the supposed conversation between Ravi and Thunberg.

Even with the conversation that is said to have taken place, there is no indication of an “insurrection” or “sinister global campaign against India” like one media house is claiming.

With many already biased against Thunberg following her initial tweet, this further ignited even more vitriol against both climate activists, with many tweeting #AskGretaWhy, a spin on the original slogan of the movement: “Ask India Why.”

Thunberg hasn’t made any statements following Ravi’s arrest, which some brought up on Twitter as well.

And soon, some in the American right-wing picked this opportunity to harass Thunberg, who has been a target since her presence at the 2019 United Nations General Assembly.

Amid all this, it remains unclear the extent of Google and Twitter’s role in exposing Ravi’s role in the movement. As of Tuesday, Delhi police said they’re still awaiting a response from Google. The local reports have not shared to what extent Google and Twitter complied with the Indian police’s request, but some are starting to raise alarms about it on Twitter.

The Daily Dot Google did not respond to a request for comment.