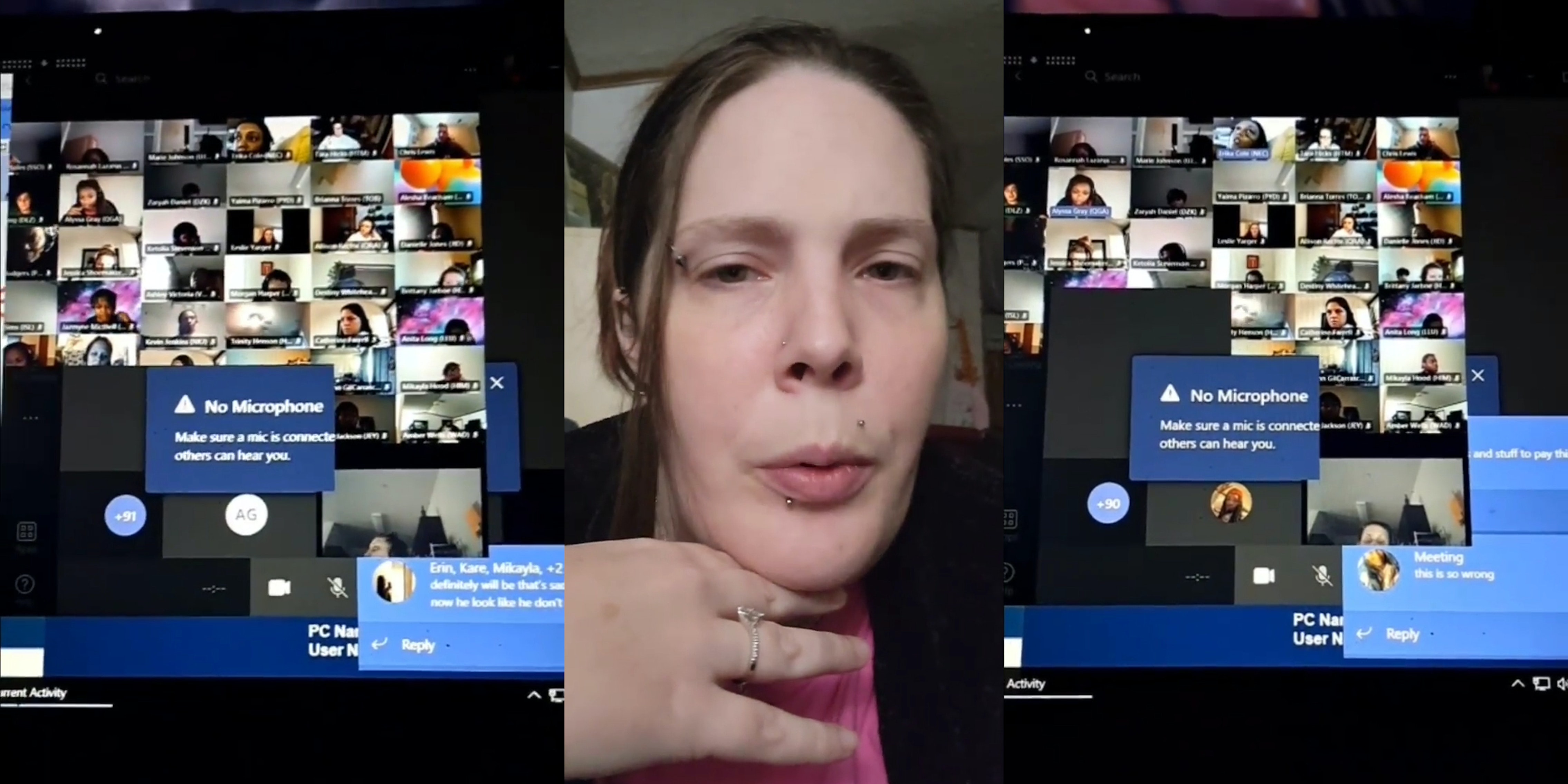 ‘Wanna hear what it sounds like when 100 people get fired?’: Call center lays off worker, and her 100 co-workers, in one Zoom

'How can you do this to us after promises these hours?'

A woman claiming to be a former employee of call center company Infocision said the company effectively laid off 100 of its employees last week, according to a Facebook Reel.

In the video, Amber Sanders said Infocision told 100 workers they would have their hours dropped to zero hours per week but were not being laid off or fired. The video then shows the aftermath of the meeting where employees discuss their futures and frustrations.

Infocision is the second-largest teleservice company in the U.S., operating 30 call centers in Ohio, Pennsylvania, and West Virginia.

In an interview with the Daily Dot, Sanders said she has worked at Infocision for just over one month.

“​​I worked there for about two weeks [in September,] and then we had a cyber attack.” she said.  “They let us go for another two weeks and they didn’t pay us. They sent us all these emails saying that when we get to come back to work we’ll get overtime and we’ll have extra hours and all this. We came back to work like a week and a half ago. And they offered us no overtime, they said there was no overtime. So of course everybody got mad.”

Infocision did not respond to a request for comment on the employees status.

Sanders said she then worked a normal week before being called into an HR meeting on Friday while she worked from her Texas home.

“I thought I was getting fired because I thought it was just me that they’re calling and HR,” she said. “You know maybe you think you’re getting fired if HR is calling you in. But when I got into the meeting—it’s an at-home job—so I got to the meeting and I see no there was like 100 people in that meeting. I’m like, OK, so I’m not getting fired.”

Sanders then said they were reassured that they wouldn’t be fired, but then were told by a boss that their hours were being dropped to zero.

“But he said that as of now that the company was cutting us all to zero hours until further notice,” she added.

According to reviews on Indeed, this is not the first time Infocision has been accused of what are effectively mass layoffs without notice.

“If performance didn’t meet their numbers, they didn’t let you work for a whole month,” one review said. “Essentially leaving you the option to quit rather than stay. No warning and no opportunity for improvement.”

A friend of Sanders took the video that she posted that showed the aftermath of the meeting.

“We were all sort of asking questions like, ‘How can you do this to us after promises these hours?’ and the video was 10 minutes after the meeting. That was when all the supervisors just left the meeting,” she said.

Sanders said she was an employee of Infocision, not an independent contractor, and that she doesn’t know if she’s eligible for unemployment because the company insists it didn’t lay her off.

According to Sanders, the company has locked them out of their accounts and they no longer have access to their work emails or files.

“That was the video was just how 100 people were asked it when they just got told we’re not fired or laid off,” she said. “Just keep checking your emails is what pretty much they told us.”

Overall, Sanders said she feels sorry for some of her co-workers.

“So many of the girls in my group are at-home moms who needed this money,” she said. “And this one girl, she’s pregnant and she was having a baby in a couple of weeks and they just let us all go during the holidays, the time you need money most.”