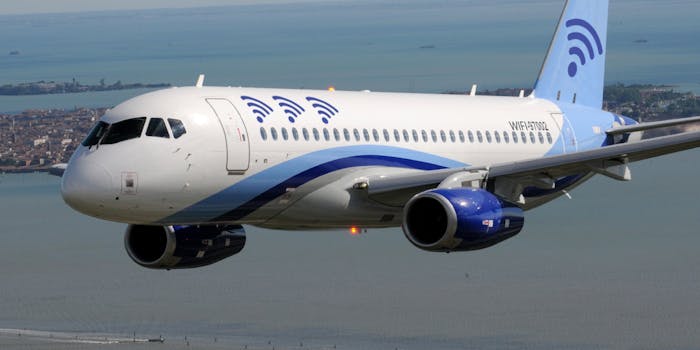 The companies beyond inflight Wi-Fi and how it about to get way, way better

Inflight Wi-Fi is about to get a whole lot better.

For as long as we have known it (since 2003), inflight Wi-Fi has been not very good. Bad, even. Typically, it’s expensive and very slow. While the rest of the industry has continued its rapid pace of innovation, the airline Internet experience—frustrating to set up and unbearably slow once it’s working—has left much to be desired.

After you purchase an enormously overpriced airline ticket, get a free, yet unwanted massage by the TSA, and pay at least $25 to actually bring things with you on your trip (because somehow that became a luxury), you either have to pay by the hour (somewhere between $5 to $15) or buy a full day pass (between $15 to $30) to use the Wi-Fi network provided by your airline, which could be hit or miss.

Right now, inflight Wi-Fi speeds can’t even match our cellular networks, which means that accessing anything data intensive (like, say, watching a movie) out of the question. Major airlines like Delta and United Airlines still haven’t made their entire fleets Wi-Fi capable. In a world that thrives off of being connected, a flight with poor or no Wi-Fi has become a burden.

But things are about to change: We spoke to the companies building the technology for airline enterprises around the world. The state of subpar inflight Wi-Fi appears to be coming to an end, with nearly every provider planning to implement speed upgrades over the next two years that will easily surpass the average home broadband speed in America.

The name you already know: Gogo

If you have flown in the United States in the last 10 years, you have heard of Gogo, formerly known as Aircell. Gogo provides the inflight Wi-Fi service for American, Alaska, Delta, United, U.S. Airways, AirTran, Japan Airlines, and Virgin America, and will be available on Air Canada and Aeromexico soon.

The company is nearly synonymous with inflight Wi-Fi in America, and with that recognition comes criticism; Gogo draws more ire than just about any other inflight Wi-Fi provider.

Gogo wouldn’t divulge the average speed of its inflight Wi-Fi when we spoke to them, but did say planes with its newest technology called ATG-4 offer peak download speeds “close to 10mbps.” There are currently 500 planes with Gogo’s ATG-4 technology, a number which Gogo expects to increase to 800 before the end of the year. Gogo’s previous technology, called ATG, only offers 3mbps and is still available on a large selection of the over 2,000 planes it works with.

But there is good news: Gogo plans to dramatically improve speeds over the next two years, finally making its inflight Wi-Fi something that can be used for more than checking Facebook and emails. Gogo says that its GTO and 2Ku technologies will deliver peak speeds over 70mbps, with GTO starting to roll out later this year, and 2Ku in 2015. Gogo tells the Daily Dot trials for the new technologies will begin with Japan Airlines and Air Canada.

Even if average speeds on GTO and 2Ku come in at 30mbps, less than half of peak speeds, that is still nearly 5mbps faster than the national broadband average of 26.5mbps. Gogo tells the Daily Dot it won’t completely phase out the older technologies, which could lead to a free tier of inflight Wi-Fi. Gogo says it’s possible it could offer some level of inflight Wi-Fi for free in the future, but there are no “definitive plans for that as of yet.”

ViaSat is expensive but does offer a slower, free option

The other big player in inflight Wi-Fi in the States is ViaSat, which supplies its Exede Internet service to JetBlue and United Airlines, and has reached an agreement with El Al, on which it expects to begin offering service “early in 2015.” Exede—which JetBlue has branded as “Fly-Fi”—currently offers the fastest inflight Wi-Fi in the country at 12mbps, a speed which is actually seen by users, according to ViaSat.

Even though it’s leading the way in inflight Wi-Fi speeds, ViaSat isn’t standing pat. The company plans to launch a new satellite in 2016, the ViaSat-2, which it will use for future speed upgrades.

Unlike Gogo, ViaSat doesn’t charge users directly for its service, giving the airlines leeway to charge what they see fit for inflight Wi-Fi. JetBlue charges $9 an hour for its inflight Wi-Fi service—nearly double the $5 an hour that Gogo charges—but does offer a slower tier that can be accessed for free.

The biggest provider you never heard of: Global Eagle

According to Global Eagle Entertainment, the company currently provides inflight Wi-Fi speeds that average between 8mbps and 12mpbs, putting it right next to Gogo and ViaSat as the consistent speed leaders. Global Eagle tells the Daily Dot it is “evaluating multiple new technologies,” and is planning to launch a new satellite in 2015, which will provide inflight Wi-Fi speeds up to 40mbps.

Panasonic Avionics may be the most ambitious company in the industry. The company supplies the inflight Wi-Fi for 50 different airlines, including American Airlines Lufthansa, Turkish Airlines, Garuda Indonesia, and Aer Lingus.

Panasonic Avionics is also the first provider to bring inflight Wi-Fi to China, with China Southern and China Eastern Airlines. The company expects complete installation of its inflight Wi-Fi service on its 500th plane next month, and plans to have 600 airlines on its network by the end of the year.

Panasonic Avionics tells the Daily Dot while download and upload speeds may vary, the average user of its inflight Wi-Fi service is “experiencing downloads in the hundreds of kilobits per second,” which puts it substantially behind the current offerings from Gogo and ViaSat.

The company tells the Daily Dot it is in the process of substantially improving its offerings, and has signed deals with satellite providers Intelsat and Eutelsat to improve its global network with high-throughput satellite services, which will become available in 2015.

Panasonic Avionics says the new technology will allow it to offer as much as four times the capacity than any of its competitors’ current or proposed networks can provide, allowing the company to handle more users without having to dramatically raise costs.

While Panasonic Avionics lets its airline partners set the prices, only one—Japan’s Skymark Airlines—has announced any plans for a free inflight Wi-Fi. The company did say it believes there will be new business models announced over the next few years.

For all of its faults, inflight Wi-Fi speeds in the United States still outpaces its counterparts worldwide. OnAir has three different connection speeds with their service; L-Band which has speeds that peak at 0.5mbps, a connection called Ku-band that gives up to 30mbps, and Ka-band, which offers up to 50mbps.

The last two options sound good in theory, but the issue here is how often the Ku-band and Ka-band are utilized during flights in comparison with the lackluster L-band. We asked OnAir about the breakdown between the bands:

“OnAir works with the airlines by recommending which network to use in combination with its operating airline network, including origin destination, and its commercial strategy for connectivity. Looking at OnAir’s current airline network, the majority of OnAir’s customers use L-band for its consistent and global coverage.”

OnAir does have a plan in place to remedy the slow speeds experienced by most of the customers flying the planes it outfits with inflight Wi-Fi. OnAir is a partner in the satellite communications company Immarsat’s new Ka-band service, GX Aviation. The company expects Immarsat’s GX Aviation to provide up to 50mbps for its inflight Wi-Fi service. GX Aviation is slated to be ready for airlines by the end of 2015.

OnAir does not directly set the prices you see for inflight Wi-Fi, instead working with the airline to set “passenger prices according to the airline strategy.”

AeroMobile lets you roam to your heart’s desire

If you’re flying outside of the U.S., there is an easier option than inflight Wi-Fi… as long as you’re only using your phone. AeroMobile will allow you to simply continue using your phone as if you were on the ground—surf the Web, send text messages, and even make calls—with no credit card or signup needed. Yes, the rest of the world doesn’t share America’s disdain for inflight phone calls, which we are on the verge of formally banning, according to The Wall Street Journal.

To accomplish this, AeroMobile has roaming agreements with more than 260 carriers around the world, including AT&T and T-Mobile in the U.S. When you use your phone on a flight outfitted with AeroMobile’s technology, you will be charged the roaming rate set by your carrier, which can be more expensive than the already costly inflight Wi-Fi, depending on your usage. (Seriously, roaming can be really, really expensive.)

However, AeroMobile’s network is plagued by slow connection speeds. AeroMobile operates on a 2.5G network, which is noticeably slower than the standard 3G service that was offered in the States for the last 10 years, and dramatically worse than the current 4G and LTE networks. The first iPhone—which was released in 2007—utilized EDGE on AT&T, a 2.5G network.

The company does have plans to improve the network very soon, with AeroMobile CEO Kevin Rogers telling the Daily Dot “we’re aiming to roll out inflight 3G in the aircraft cabin during the first half of 2015 and 4G is expected to follow, timeframes yet to be confirmed.”

AeroMobile isn’t the only player in inflight cell networks. OnAir offers Mobile OnAir, which works the same way AeroMobile’s service does, with the costs showing up on your cell phone bill. OnAir says when both inflight Wi-Fi and Mobile OnAir are available on the same flight, the majority of users choose Mobile OnAir, as it is easier to use. OnAir also noted that voice calls—including checking voicemails—only makes up about 10 percent of Mobile OnAir’s usage.

As most aspects of flying have gotten worse over the years, the upcoming advancements in inflight Wi-Fi will help improve the experience, giving some flyers access to a better Internet connection than they get at home. For the first time—even as new technologies like 4K become prevalent over the next few years—it looks like airlines will be able to keep up with the pace.

None of the companies would give any indication if higher prices would accompany the faster inflight Wi-Fi, which makes sense given that most of them don’t determine pricing (that’s still on the airline, so make your own assumptions about how that will go). If you’re upset about the cost of your inflight Wi-Fi, in most cases the blame lands on the airline. For the fees the airlines charge, the least they could do is let us binge our favorite show in 1080p without it buffering.