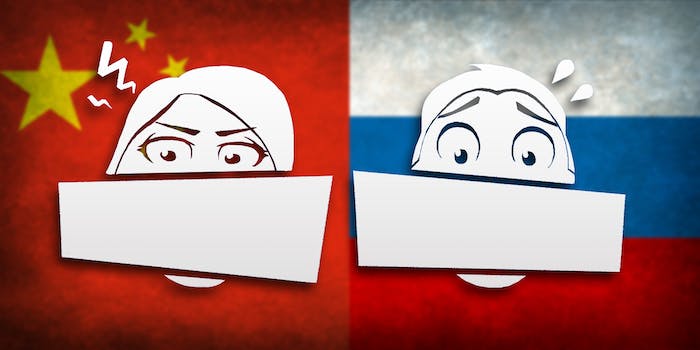 Will the U.S. giving up control of a key Internet function hurt free speech?

Conservatives are worried, but more liberal watchdogs say it's the right move.

A small nonprofit organization that helps the United States oversee a core piece of the Internet has found itself at the center of a fight over online freedom of speech.

The Internet Corporation for Assigned Names and Numbers (ICANN) has managed Internet components like the Domain Name System (DNS), which tells computers how to find websites, since 1998. It performs these functions under a contract with the National Telecommunications and Information Administration (NTIA), an agency of the Commerce Department. The Obama administration is planning to transfer the ICANN contract away from the U.S. government agency to international oversight, but conservatives who think that U.S. management of DNS has protected free expression are worried that the international transition could harm the Web.

“As it currently stands, the Russian government would not be able to insist upon ‘My way or the highway.'”

ICANN “has been evolving from a multistakeholder coordination process into a kind of quasi-governmental entity,” Berin Szoka, the president and founder of the conservative group TechFreedom, told the Daily Dot in an email.

Szoka said that while he preferred ICANN to the International Telecommunication Union, the U.N. agency that sets communications standards, he was worried that the former was beginning to treat nondemocratic regimes too much like the latter.

“For all its flaws, ICANN has been vastly preferable to the clearest alternative: having the ITU take over, which would mean deciding issues on a one-country-one-vote basis,” he said. “That approach would empower repressive governments.”

Szoka and others worry that, if countries like Russia and China could influence how DNS works, they would manipulate it to limit access to materials, websites, or services that they deem offensive. While ICANN’s Government Advisory Committee (GAC) limits individual countries’ influence by deciding matters through consensus instead of a vote, European nations want to change that system, which could empower governments whose values are not aligned with those of the U.S.

“There is a constant push by the European to go to an individual voting process with majority rule,” said Shane Tews, a visiting fellow at the conservative American Enterprise Institute. “That would change the landscape greatly.”

“Their real goal,” Szoka said, referring to repressive governments, “is to change the field of battle to one they can control—the ITU, where they can rally winning coalitions. At ICANN, their influence through the GAC is muted.”

The NTIA maintains that its transition plan is the right thing for the Internet. An agency spokeswoman said that the Obama administration has made the accountability of the new system a priority from the beginning. She pointed to remarks by NTIA Administrator Lawrence Strickling that dismissed the notion of repressive regimes exploiting an international system.

“While countries like Russia might want to export [their censorship] approach worldwide,” Strickling said in a July 2014 speech, “the Internet’s decentralized and cooperative nature would never allow it to happen.”

ICANN is also aware of censorship concerns, and its accountability working group has been meeting regularly online and in person to ensure that the transition plan takes them into account. ICANN’s members recently met in Buenos Aires for a technical summit that was dominated by talk of the transition, including but not limited to accountability measures.

Matthew Shears, the director of the Global Internet Policy and Human Rights Project at the Center for Democracy & Technology, attended the Buenos Aires meeting and said that freedom of speech came up in many of the sessions.

“The management of the Internet is done through many entities and spaces of which ICANN is but one,” Shears told the Daily Dot in an email, “but what characterizes them is that they are multistakeholder and transparent, thereby ensuring their openness.”

Despite the vast gulf between democratic and nondemocratic states’ treatment of the Internet within their borders, the largely technical meetings at ICANN have brought together starkly different regimes. Theresa Swinehart, a senior adviser to ICANN President Fadi Chehadé, said that ICANN’s Government Advisory Committee has “participation from all governments of the world.”

Asked directly whether ICANN was concerned about the influence of nondemocratic regimes, she responded, “No, there’s no concern about other governments participating in the process.”

The importance of DNS cannot be overstated. It is the Internet’s phonebook, connecting bizarre-looking IP addresses to the domain names with which all Internet users are familiar. When someone types google.com into their browser, their request goes through a DNS server, which understands that the user is looking for one of Google‘s many servers, including 195.122.30.25. If that routing information were compromised or corrupted, whether intentionally or accidentally, it could severely disrupt the basic flow of traffic over the Web.

“The concern about the potential abuse of DNS by some outside sources if the U.S. government oversight is removed, that’s been a clear concern by everybody involved in this process working on developing this transition plan all along,” said Emma Llanso, director of CDT’s Free Expression Project.

“DNS is the fundamental addressing system of the Internet,” Llanso said, “and it’s crucial that it remains an addressing system and it doesn’t turn into an opportunity for people to pull different policy levers.”

Swinehart said that conservative fears of ICANN enabling DNS-based repression were overblown. Governments that disapprove of liberalized online discourse use U.S. dominance over the Web as an excuse to censor it. Both China and Russia have justified Internet censorship by pointing to America’s prominent role in Internet management. The transition from American to international oversight, she said, would actually discourage the kind of fragmentation that local Internet censorship can create.

“If there’s a global Internet and a uniquely coordinated one through the checks and balances that exist with the technical community and the private sector and governments and civil society,” Swinehart said, “you actually minimize any of the risks of fragmentation for the Internet more broadly. You also minimize any potential risks [of] efforts for control or efforts toward capture.”

This is chief refrain from ICANN defenders in response to conservative criticisms of their transition plan. The transition carries the political benefit of clearing up who runs the most basic features of the Internet. International oversight of ICANN would undermine one of Russia and China’s most common attacks on the Internet, which grew out of a collaboration between the American military and the U.S. academic community.

“That’s been a bone of contention in global debates about Internet governance for years and years,” said Llanso. “Other governments [point] to the fact that the United States has this unilateral relationship with core Internet technical infrastructure.”

The question of whether the ICANN transition will empower or discourage repression has divided liberal and conservative tech advocacy groups. TechFreedom and AEI argue that the U.S. is the best overseer, while CDT and the American Civil Liberties Union (ACLU) favor an international approach.

“The best form of internet governance is a decentralized multi-stakeholder system, open and accountable to all and not subject to undue influence by any state actor,” Gabriel Rottman, a legislative counsel at the ACLU, told the Daily Dot in an email.

State actors regularly suppress online freedom of speech by pulling technical levers, Rottman noted. China’s “Great Firewall” is the most famous and most sophisticated example, blocking access to information on sensitive domestic events, like the 1989 Tiananmen Square massacre. Rottman said that he hoped local censorship would become more difficult and more rare if the core functions of the Internet, including DNS, were handled by an international group.

Conservatives who see America as the premier global force for democracy maintain that unilateral U.S. oversight of ICANN is the best way to prevent Web censorship. But liberal technologists say that international oversight is both more legitimate and more robust.

“The real strength of the global multistakeholder community is its diversity,” said Llanso. “As it currently stands, the Russian government would not be able to insist upon ‘My way or the highway.'”

But Szoka said that he was worried about governments gaining more of a say in what should be a purely technical process. The Governmental Advisory Committee, he said, has substantial influence over the granting of new domain extensions like .bank or .amazon, the latter of which sparked an international incident between South America and the online shopping giant. Szoka described this influence as the tip of an iceberg.

“ICANN itself,” he argued, could soon become “able to make essentially regulatory decisions with little accountability to anyone in particular.”

One of Szoka’s top priorities is to keep ICANN, the nonprofit organization itself, based in the United States. That way, even if it transitions to international oversight, it can be sued in U.S. courts as a last resort for aggrieved parties.

“If that were ever to change,” he said, “and ICANN were to move to Switzerland, say, it’s hard to see what recourse would really be left to someone aggrieved by an ICANN decision.”

The ICANN transition process could be completed as early as next July, but it could also be delayed until the fall. The House of Representatives recently passed a bill giving Congress 30 days to review whatever plan ICANN’s members present to the NTIA. The Senate has yet to pass the measure. In the meantime, the challenge for ICANN is to keep politics out of Internet management under the new system.

“There are always stories about certain mid-level government officials from countries that do not embrace our sense of freedom of speech calling ICANN or the registries or registrars asking them to take down full areas of the zone files that have certain words or phrases in them,” Tews said. “The answer has always been ‘no’ and the challenge is to ensure it stays ‘no.'”