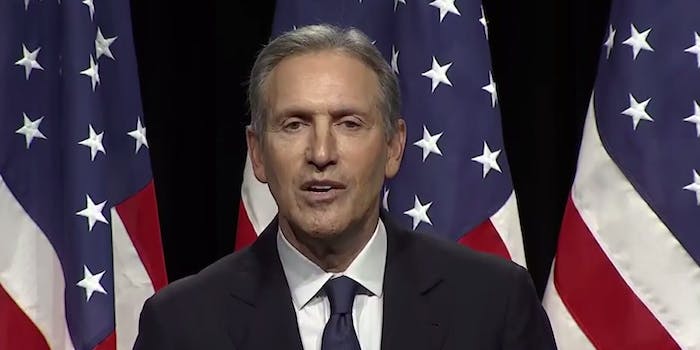 Schultz made the remarks in an open letter published on Medium.

Former Starbucks CEO Howard Schultz defended his consideration of entering the 2020 presidential election as a “centrist independent” in an open letter this week, declaring that he believes there is “an unprecedented appetite” for someone like him to run.

Schultz, who has drawn an inordinate amount of scorn online (and in person) since announcing that he was considering throwing his hat into the 2020 ring, outlined his reasoning in a post on Medium published on Monday morning title “Our Path.”

He addressed it to his “Friends.”

“I firmly believe there is an unprecedented appetite for a centrist independent presidential candidate, and that there is a credible path for an independent to win more than the necessary 270 electoral votes — a key criteria in my consideration of whether to run,” he wrote.

Schultz’s op-ed comes after a Cook Political Report analysis declared his efforts for the presidency dead before they even began. That was buttressed by other reports that showed how impossible it would be for any third-party candidate, let alone Schultz, to reach 270 electoral votes.

In the post, Schultz also said he was “committed to ensuring” that he did not help re-elect President Donald Trump because of his possible candidacy, a frequent criticism he’s faced in the past several weeks.

He also argues that the Democratic party may swing “far to the radical left” which, in his opinion, could also be a “spoiler.”

“The stakes are too high to cross our fingers and hope the Democratic Party nominates a moderate who can win over enough independents and disaffected Republicans, and even fellow Democrats, to defeat Trump next year,” he wrote.

The former Starbucks CEO hinted at this while speaking with the Washington Post last week, arguing that he would be willing to not enter the 2020 race if Democrats nominated a more centrist candidate.

He also promised to lay out his policy positions “in the coming weeks.”

The Medium post has closed any comments, perhaps a nod to the torrent of criticism Schultz has faced on Twitter since announcing his possible “centrist independent” bid.