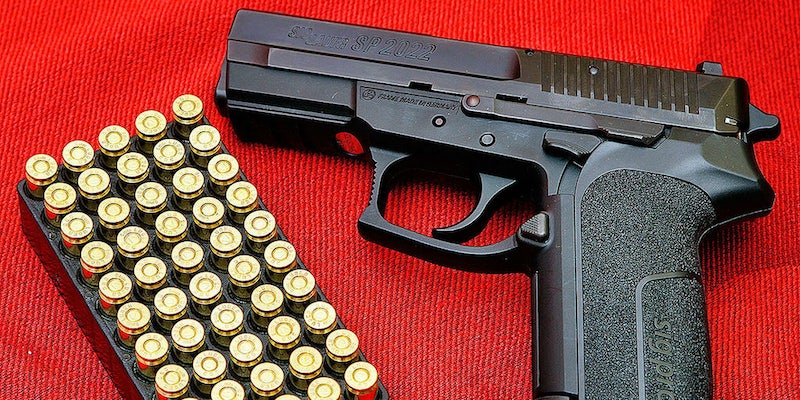 How to survive a mass shooting

What should you do if you find yourself confronted by a gunman who’s hellbent on killing you and everyone you’re with?

Sadly, this macabre question is one that Americans wrestle with time and again, and the answer is always the same.

The day after the Umpqua Community College massacre in June 2015, Ben Carson gave Fox News host Brian Kilmeade and the rest of America his advice on what to do if you find yourself in a similar situation: Fight back.

“I would say, ‘Hey guys, everybody attack him. He may shoot me, but he can’t get us all.’”

“Not only would I probably not cooperate with him. I would not just stand there and let him shoot me,” Carson said. “I would say, ‘Hey guys, everybody attack him. He may shoot me, but he can’t get us all.’”

While Carson’s critics slammed his comments as insensitive, the doctor repeatedly defended them. “I want to plant in people’s minds what to do in a situation like this,” Carson said on CBS’s This Morning. “Because, unfortunately, this is probably not going to be the last time this happens.”

Carson is almost certainly correct that mass shootings will continue. The United States is averaging more than one mass shooting per day in 2015. Yet, according to experts, his advice about precisely how people should react in an active-shooter situation is dangerous—but it’s not as wrong as some might think.

Here’s what the experts say you should do if you find yourself in a potential mass-shooting scenario—advice we hope none of you ever have to put into action.

In recent decades, security professionals have developed a rubric for how people facing mass shooters should react. The concept is called “Run, Hide, Fight.”

The core tenets of “Run, Hide, Fight” are spelled out in this video produced by the City of Houston with a grant from the Department of Homeland Security.

While Carson’s assertion about the importance of ganging up to attack an active gunman is in line with the current thinking, putting it as the number one course of action is not advised.

Thomas Foley, a professor who teaches security management at Embry-Riddle Aeronautical University, says “Run, Hide, Fight” should be used as a general checklist for decision making. The concept is relatively simple: Your first option should be to run away from the source of danger. If that doesn’t work, find someplace safe to hide from the shooter. If all else fails, then you should attempt to physically engage the shooter.

For the first option, Foley uses the example of a gunman going on a shooting spree in a shopping mall. If you hear gun shots coming from one side of the mall, your best option is simply to run in the opposite direction. “The further you get away from the shooter, the safer you’re going to be,” Foley tells the Daily Dot.

If the shooter is standing in a hallway outside of the store you’re in, running away isn’t an option. In that scenario, the best course of action is to find a place to hide, says Foley, preferably behind a locked or barricaded door. In this situation, it’s important to remember to silence any cellphones because an ill-timed ring or vibration could alert the shooter to your hiding place.

Only when running and hiding have failed, and you are face-to-face with the gunman, should you fight.

“By ‘fight,’ it doesn’t mean you have to be a Rambo-type person and know martial arts or anything like that. It is just putting up resistance with whatever you have available,” Foley says. “If it’s a college classroom environment, fighting could constitute people throwing books, backpacks, whatever they had available at the shooter and then rushing him.”

As Foley explains, when you throw something—say, a dictionary—at the shooter, his “brain’s automatic response to duck kicks in, which throws off the shooter’s aim.”

“The further you get away from the shooter, the safer you’re going to be.”

“This may increase the odds of somebody surviving the incident,” Foley says.

In a best-case scenario, multiple people should throw anything they can at the gunman while “closing the distance between themselves and the shooter to tackle the shooter, fight with the shooter,” says Foley. “You might increase the chances of survival for at least some in the room. There still may be some casualties, but it may be less than if nobody does anything.”

An analysis by the Federal Bureau of Investigation of 104 mass shooting incidents between 2000 and 2014 found that, in 17 of those cases, the shooter’s civilian victims were able to physically subdue the shooter; three of those situations involving firearms to incapacitate the assailant.

A similar system for surviving active-shooter situations, developed by the ALICE Training Institute, replaces the word “fight” with “counter” as a way to emphasize that engaging with the shooter means a wider variety of options other than trying to rip the gun out of his hands.

“ALICE Training does not believe that actively confronting a violent intruder is the best method for ensuring the safety of all involved, whether in a school, a hospital, a business, or a church,” reads a post on the organization’s website. “Counter focuses on disruptive actions that create noise, movement, distance and distraction with the intent of reducing the shooter’s ability to shoot accurately. Creating a dynamic environment decreases the shooter’s chances of hitting a target and can provide the precious seconds needed in order to evacuate.”

The limits of ‘Run, Hide, Fight’

Carson’s recommended strategy is effectively the same as the fight portion of “Run, Hide, Fight;” however, Carson’s prescription for doing any specific thing in every mass-shooter situation contradicts expert advice.

There’s a certain vagueness to “Run, Hide, Fight,” which is largely deliberate. The scheme, which has been endorsed by the Department of Homeland Security, is based on the idea that these types of situations are dynamic and highly idiosyncratic—what works in one situation may be wholly inappropriate in another. People in a mass-shooter situation should keep “Run, Hide, Fight” in mind as a rough blueprint but use their own judgment about the best specific course of action.

The need for this flexibility was a lesson that security experts learned after the massacre at Columbine High School in 1999.

Prior to Columbine, the advised procedure was significantly more rigid. The thinking was that, especially in school settings, the best course of action was to immediately go on lockdown, with students hiding under desks or in closets until the authorities arrived.

However, a number of Columbine students who hid in the library were discovered by the shooters and killed. When security experts went over what happened, they realized there was a fire escape they likely could have taken to safety. The rigidity of telling people to do anything every single time, regardless of the specifics of the situation, was needlessly putting people in danger.

While what happened at Umpqua Community College has primarily been viewed trough the lens of a mass shooting, the question Kilmeade posed to Carson, with someone pointing a gun at him and asking a direct question, could also be seen as a hostage situation. Caron’s suggestion that he would “probably not cooperate” with the shooter isn’t advisable, says Foley, at least from a personal safety standpoint. Foley argues that, typically, in hostage situations, the safest thing to do is to just go along with whatever the victim believes the hostage taker wants to hear.

We’re not all heroes

“If you decide to run away, there’s no shame in that either. Both running and hiding are valid options.”

Aside from the questionable safety of Carson’s advice on surviving a mass shooting, what sparked the most ire was the candidate’s apparent implication that the victims of the UCC shooting were at least partially responsible for their own fate because they didn’t do enough to proactively stop the shooter.

This criticism could be seen as especially pointed because one shooting victim, a U.S. Army veteran named Chris Mintz, charged the shooter in an attempt to stop the massacre. Mintz—who was shot seven times and survived—has been hailed as a hero. An online crowdfunding campaign to pay his medical bills has raised over $800,000, well above its initial $10,000 goal, and there’s another effort to convince President Barack Obama to award Mintz the Presidential Medal of Freedom.

Foley agrees that Mintz’s actions should be widely lauded for their selflessness. Not only did Mintz exhibit bravery in the face of extreme danger, the post-incident news coverage of his heroism largely replaced discussion of the shooter and his motives—a way to minimize the copycat effect.

Even so, Foley insists, that doesn’t mean everyone should try to be a hero.

“If that’s what you decide to do, that’s your decision. If you decide to run away, there’s no shame in that either. Both running and hiding are valid options,” he says. “People out there who can find themselves in this situation in the future should realize that, if you can, run, and you can hide, and that’s a valid survival strategy, and [if] you take it, good for you.”