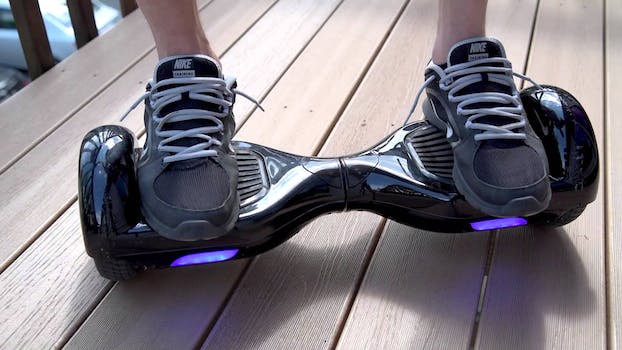 But when are they going to get them on false advertising? The damn things don't even hover.

The U.S. government is raising serious concerns about so-called hoverboards—and they have nothing to do with the fact that the boards don’t actually hover.

On Thursday, the U.S. Consumer Product Safety Commission sent a notice to manufacturers, importers, and retailers of self-balancing scooters (more commonly called hoverboards) warning that the popular devices pose a serious safety risk to users. The CPSC urged everyone involved in the business of selling hoverboards to adopt voluntary safety standards or face the risk of a recall.

“Self-balancing scooters that do not meet these voluntary safety standards pose an unreasonable risk of fire to consumers,” wrote Robert Howell, the acting director of the CPSC’s Office of Compliance and Field Operations. “Consumers sick serious injury or death if their self-balancing scooters ignite and burn.”

Between the beginning of December 2015 and mid-February, the agency received data on 52 incidents of hoverboards catching fire that produced damage costing more than $2 million, including the destruction of two homes and an automobile.

“We believe that many of the reported incidents, and the related unreasonable risk of injuries and deaths associated with the fires in these products would be prevented if such products were manufactured in compliance with the referenced voluntary safety standards,” Howell wrote.

He added that agency employees may eventually begin seizing hoverboards that don’t meet voluntary standards at the point of their importation into the the country—they typically arrive from China—and even hinted at a full recall.

A spokesperson for hoverboard manufacturer Swagway said that the company has been working with the CPSC on its investigation into hoverboard safety and conducting its own independent safety research.

“Rechargeable lithium-ion batteries throughout its history has always posed a potential hazard and our staff has been working day and night trying to analyze data on any and all potential issues and concerns,” the spokesperson said in an emailed statement. “While still at the final testing phase, to address these concerns, we are in the belief that we have mastered the technology, where it will no longer be a concern and have plans to incorporate those features into our next production. We are confident that our product is by far the safest on the market.”

As is common practice for many consumer-safety rules, existing hoverboard safety standards were developed by a private firm—in this case, Underwriters Laboratories. Earlier in February, the company launched a program to certify hoverboards as safe. But as Mashable reports, the organization has yet to certify any hoverboards currently on the market.

The CPSC’s notice is the result of an investigation into safety across the hoverboard industry that began around the middle of January. While the central focus of that investigation was a rash of fires relating to devices’ often sub-standard batteries, the agency is also look into how hoverboards’ designs contribute to people falling off the products and injuring themselves.

“We are also expanding our investigation of the falls associated with hoverboards. At first glance, it is easy to believe the risk of falling off a hoverboard is an obvious one and to dismiss those injuries as user inexperience or error,” CPSC Chairman Elliot Kaye said in a statement issued in January. “However, I am concerned, for example, that the current designs of these products might not take fully into consideration the different weights of different users, potentially leading to the units speeding up or lurching in a manner that a user would not have reason to anticipate, especially a first-time user.”

Kaye added that hoverboard owners should follow basic safety precautions: keep a working fire extinguisher nearby while charging or riding the boards, only ride in an open area away from combustible materials, wear appropriate safety gear like helmets and wrist guards, and don’t ride on or near public roads.

The United States isn’t the only country where regulators are cracking down on hoverboards. As of last December, British authorities had impounded more than 15,000 hoverboards that they deemed unsafe.