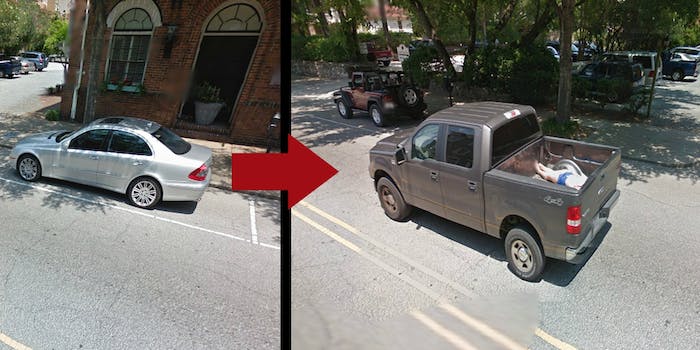 Click forward in these Street View spots, and you'll be transported to somewhere completely different.

You are standing at a magical crossroads. One step backward and your life remains the same. One step forward,and you are transported to a completely different world.

This is the premise of Reddit’s r/TakeOneStepForward, a 10-month old subreddit that collects the best of Google Street View’s randomness.

Each post on r/TakeOneStepForward directs to a unique Google Street View address where, if you click forward, you see a completely new or interesting scene, such as this one from 8380 Ramberg, 457 m NE, Norway.

This phenomenon can likely be explained by the accidental splicing together of different images shot by Google’s car-mounted cameras.

Since Google Street View was launched in 2007, the panoramic feature has shown the world Tsunami ravaged Japan, the Large Hadron Collider, and a curbside breakup. Searching for Street View oddities has become a popular pastime, but the trend of exploring the magic that happens when Google’s image stitching comes undone is a relatively recent phenomenon,

Check out some more of the best images from r/TakeOneStepForward below.