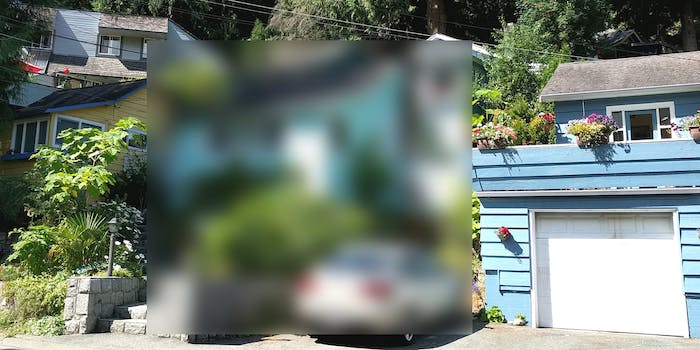 You can’t unblur your house on Google Maps’ street view

Think twice before you request to blur a Google Street View image.

Over 1 billion people use Google Maps every year. It’s no wonder then that dozens of legal disputes on several continents have forced the company to now allow users to blur Street View and Satellite View images taken without their consent. But recently, the internet has noticed something peculiar about Google Maps: Once something gets blurred, there’s no turning back.

Last month, a Reddit post in a group for posting life tips detailed how users who are unhappy with Google’s Street View pictures can request them to be blurred on Maps. There is any number of reasons why someone might want to do so. Google, for example, has always blurred the fronts of domestic violence shelters to protect victims.

Outside of obvious privacy issues, Google has inadvertently caught some people in embarrassing (and illegal) scenarios over the years. In 2010, the NYPD used Street View images of drug sales in front of a Brooklyn bodega as evidence to arrest and indict seven people accused of being in a heroin-selling ring. That same year, 3 percent of Germans voted against Google Maps camera cars being allowed on streets, so Google abandoned the Street View project in Germany. To this day, only major cities like Berlin and Frankfurt have fully mapped areas, and many of those photos date back to before 2010.

But the comments on the Reddit post veered in the opposite direction. “Beware – previous owner blurred mine, I cannot unblur! Have tried two or three times,” wrote one user. Another responded, “Came here to say this. A previous owner to our home blurred it. I have attempted every kind of contact with Google and they just tell me I’m SOL.”

Others have noticed this issue and have frantically sought to reverse the blur. On Google’s Product Forums help page, there are over 240 posts with titles like “Getting our house unblurred,” and “Impossible to remove blur.” One of the saddest posts is titled “Unblurred photo of face in street view.” User JamesBunting1 asked, “There is a photo of my now deceased father on street view that has his face blurred out. Is there a way to find and purchase a non blurred copy? It would be very comforting to me to really see him.” Treebles, an “Advanced Troubleshooter” lamented, “Sorry for your loss. I am afraid there is not, Google does not keep the non-blurred images for long and they do not provide copies of the images on request.”

If you’re curious how to ask Google to blur an image on maps, go to Google Maps and type in an address. Click a photo of that address on the left-hand side that has the “360” symbol on the bottom. This will bring you to Street View. At the top of the page should be the address with three vertical dots next to it. Click those dots and a drop-down will appear that has the option to “Report a Problem.” A new page will load labeled, “Report Inappropriate Street view.” Adjust the image so that the thing you want to blur is inside the red box. Fill out the form and check back in a few days to see if the image has been blurred.

You can ask Maps to blur parts of photos, like faces or license plates, or entire properties, as long as you believe their picture contains “identifying information.” Google also allows users to request deletion of user-uploaded images that appear in the left sidebar when an address is entered.

However, one Reddit user noted that even asking Google to blur “parts” of photos is risky business, “There was a security camera at a house I lived in once. I requested they blur out JUST the security camera but they blurred the whole house. They would not remove the blur afterwards.”

Google isn’t hiding the fact that the blurs are irreversible. Its Street View Privacy Policy states, “Once Google blurs an image the effect is permanent. If you submit a request to have your personal home blurred from Google Street View imagery, all historical and future images of your home will also be blurred.”

But blurring makes as much sense as wanting things unblurred. Perhaps you’re getting ready to sell your house and want to make sure people can view the property. Or you just took over the lease on a property that was previously censored.

After all, blurring things has often led to a Google Maps-created Streisand Effect. If a house is blurred, it may make people in an area where most houses aren’t blurred curious, like in the case of this Brooklyn brownstone, which caused suspicion and a subsequent Gothamist article about the reason behind the blurring.

If a business or property owner wants back in, there should be a process for getting new pictures taken. Even if Google would prefer users take 360-degree pictures on a phone and submit them for review, that would be better than just permanently blurring properties for eternity.