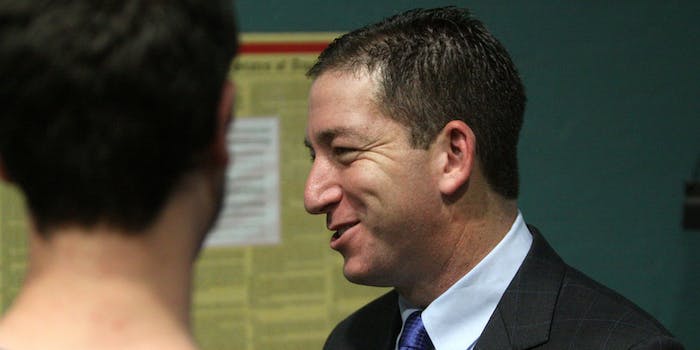 What does Glenn Greenwald know that we don't?

Through the work of a leaker and a select group of journalists, the public has learned more about the surveillance practices of the National Security Agency (NSA) in the past year than it knew since the agency formed in 1952.

But the biggest NSA bombshell could drop sometime in the next two months.

Journalist Glenn Greenwald, in a Monday night appearance on The Colbert Report, told host Stephen Colbert that, not only are there “lots” of NSA stories left to tell, but the most important one could be ready for publication in four to eight weeks.

“I genuinely believe that the story that’s the biggest one—that will make the biggest impact and will shape how the events of the last 10 months are viewed by history—is the story on which we’re currently working,” Greenwald said.

Greenwald became a sort of journalism celebrity last June, when he published the first of what would become a series of reports on NSA surveillance based on documents former NSA contracter Edward Snowden leaked to Greenwald and journalists at the Washington Post.

The initial reports on the Snowden documents appeared in the Guardian, but Greenwald left the UK-based newspaper in October to start a new digital publication, The Intercept, backed by eBay founder Pierre Omidyar.

Even though the NSA scoops earned Greenwald a Pulitzer Prize for public service reporting, Colbert was, perhaps predictably, not impressed. The host played devil’s advocate, as he’s wont to do, and questioned whether it was truly beneficial to reveal the secrets of the government’s surveillance machine.

Greenwald defended the importance of his reporting by explaining that it revealed how the U.S. government was “invading” the Internet and “turning it into this mass ubiquitous instrument of suspicionless surveillance.”

“It makes the Internet weakened so that all communications that take place electronically over the Internet are known to the NSA, collected, monitored, and stored,” he said.

The main reason Greenwald was appearing on the show was to promote his new book, No Place To Hide. In an excerpt from the book published by the Guardian on Monday, Greenwald reported that the NSA secretly installed backdoors, or security vulnerabilities for the purpose of surveillance, in “routers, servers, and other computer network devices” made in the U.S. by intercepting hardware from the mail.

“Things that [the U.S. government has] been accusing the Chinese government of doing for years, and urging people not to buy Chinese products,” Greenwald told Colbert, “but which they themselves have actually been doing so people will buy American products that they can then invade.”

Greenwald said he will release a number of previously undisclosed Snowden documents Tuesday, coinciding with the book’s release.