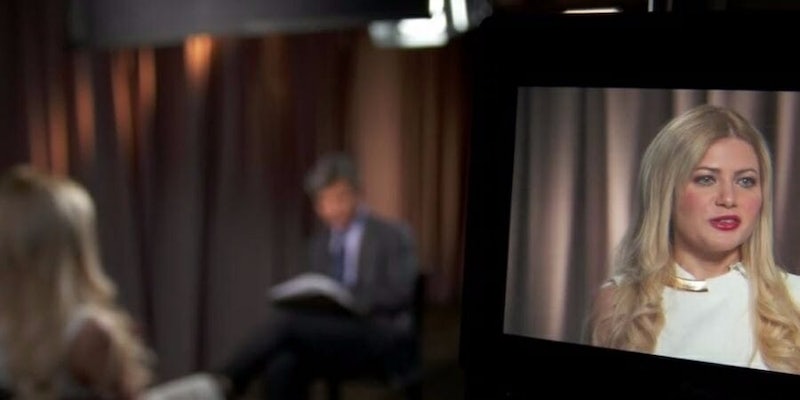 George Papadopoulos, a former foreign policy adviser for Donald Trump, pled guilty in October for lying to the FBI.In her first interview since, his fiancée called him a patriot and said he was an important figure during Trump’s presidential campaign.

“George is very loyal to his country,” Simona Mangiante told ABC News’ George Stephanopoulos. “He is already on the right side of history. I think he will make a big difference.”

When it was announced that Papadopoulos had given false statements to the FBI and that he was cooperating with Robert Mueller’s investigation, the Trump administration and conservative media figures like Sean Hannity tried to downplay Papadopoulos’ role.

Though Trump had called Papadopoulos “an excellent guy” when discussing his foreign policy advisers in 2016, Trump campaign adviser Michael Caputo referred to him as a volunteer “coffee boy” after the guilty plea.

“He never showed up at Trump Tower,” Caputo told CNN in October. “Never had any interaction with any of the campaign leaders around me, and the leaders of the Washington office of the campaign didn’t even know who he was until his name appeared in the press …”

“He was the coffee boy. You might have called him a foreign policy analyst, but if he was going to wear a wire, all we would have known now is whether he prefers a caramel macchiato over a regular American coffee in conversations with his barista.”

….came to the campaign. Few people knew the young, low level volunteer named George, who has already proven to be a liar. Check the DEMS!

Press Secretary Sarah Huckabee Sanders said Papadopoulos was an unpaid volunteer. Mangiante, however, pushed back on that narrative.

“First of all, I would love George to learn how to make a coffee, because it’s absolutely out of his skills,” she said jokingly. “George is a remarkable young man with incredible experience in the field of energy and oil policies. This experience led him to get into the campaign and to advise the president at only 28 years old.”

She also said he set up meetings for the campaign with “leaders all over the world” and that he was “constantly in touch with high-level officials in the campaign,” including Steve Bannon and Michael Flynn.

According to court filings, Papadopoulos was in a meeting with Trump and other campaign officials before the election and offered to set up a rendezvous between Trump and Russian President Vladimir Putin.