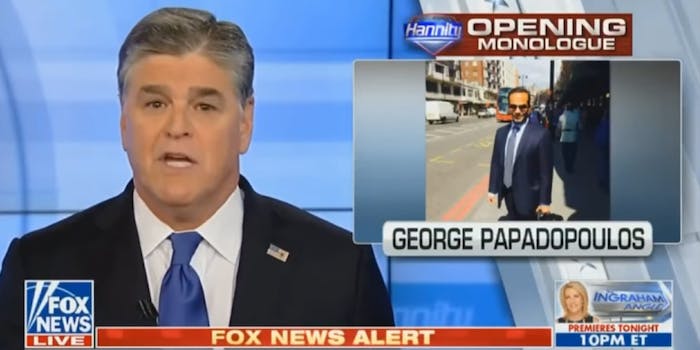 Screengrab via GREAT US - NEWS/YouTube

Sean Hannity, the hard-right Fox News pundit and unabashed supporter of Donald Trump, came out in defense of the president on Monday night with an argument that has critics ready to flip a table.

Hannity largely echoed the talking points from the White House on Monday following the news that three members of the president’s campaign were charged as part of Special Counsel Robert Mueller’s Russia probe, while adding his own twist to the argument.

To defend Trump, Hannity insisted that the indictments of former campaign chairman Paul Manafort and staffer Rick Gates and George Papadopoulos’ admission of making false statements to the FBI about his conversations with people who had ties to Russia were not harmful to the president.

In his full-throated defense—which he claimed might by one of the most important monologues on his show—Hannity claimed that he had “never heard about” Papadopoulos until Mueller’s team unsealed his guilty plea of lying to the FBI. He also said Manafort’s indictment had “nothing” to do with “Russia collusion.” Which is true—however, he left out the belief that Mueller’s team may use Manafort’s indictment as leverage to get information about other people.

"He admitted, OK, he lied to the FBI. I think he is 29 years old" pic.twitter.com/MRxUhUHc1q

The same idea was floated by President Donald Trump on Tuesday morning as he tried to downplay the importance of Papadopoulos to the campaign in a series of tweets. Court documents show the former campaign volunteer tried to set up a meeting between Trump’s campaign and Russia after he joined the campaign in March 2016.

The admission of guilt is the clearest evidence yet that members of Trump’s campaign attempted to connect with Russia ahead of the 2016 election.

“The Fake News is working overtime. As Paul Manaforts lawyer said, there was ‘no collusion’ and events mentioned took place long before he…….came to the campaign. Few people knew the young, low level volunteer named George, who has already proven to be a liar. Check the DEMS!” Trump tweeted on Tuesday morning.

The Fake News is working overtime. As Paul Manaforts lawyer said, there was "no collusion" and events mentioned took place long before he…

….came to the campaign. Few people knew the young, low level volunteer named George, who has already proven to be a liar. Check the DEMS!

However, despite Hannity and Trump trying to cast Papadopulos as a low-level figure who didn’t matter to the campaign, it’s clear—from Trump’s own Twitter feed—that he was at least important enough to have then-candidate Trump’s ear at least once. Papadopulos is the fourth person on the left seated next to the president in the photo below.

Also, Hannity was signing a different tune about Manafort’s importance to Trump’s campaign in August 2016 when he tweeted a quote from Newt Gingrich where the former politician said “nobody should underestimate” how much Manafort did to help Trump’s campaign.

Beyond Hannity fudging the facts, the clip struck many as absurd due to Hannity brushing off Papadopoulos’ actions because he was just 29 years old while previously blaming a Black teenager for getting shot.

@seanhannity Trayvon Martin was 17. What did you say about him?