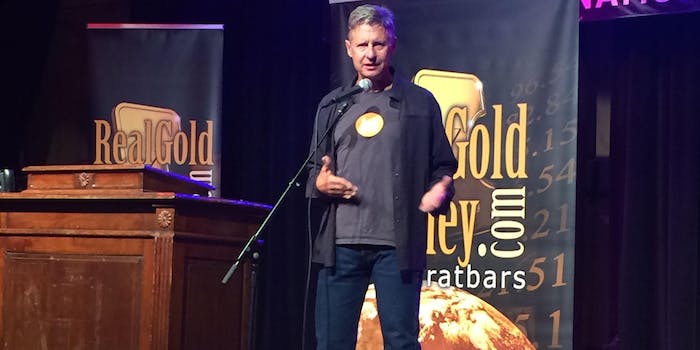 “I look at it as the Visa card of the future.”

A candidate who received more than 1.2 million votes in the 2012 presidential election is about to give a vote of confidence to Bitcoin.

Running on the Libertarian ticket, former two-term New Mexico Gov. Gary Johnson managed to pry a small but significant 1 percent of the electorate from Barack Obama and Mitt Romney. While Johnson hasn’t announced whether he’ll try for president again in 2016, he said he has decided to try Bitcoin, the popular cryptocurrency embraced by many in his party.

“I’m about to invest in it, that’s where I’m at,” Johnson told the Daily Dot after his speech at LibertyFest NYC on Saturday.

Johnson was the headline guest at LibertyFest, which featured about 20 speeches and musical performances on a range of topics related to the so called Liberty Movement.

Closing out the day-long event held at Warsaw, a Polish-themed pub with a connected auditorium in Brooklyn’s Greenpoint neighborhood, Johnson assured the enthusiastic crowd of about 200 that he is their “spokesman,” suggesting his political success is derived from his adherence to Libertarian values above personal characteristics.

But while Libertarians have flocked to Bitcoin and have been some of its most vocal supporters, due in part to the currency’s decentralized and deregulated nature, Johnson has been somewhat mum on the topic until now.

In a Reddit “Ask Me Anything” (AMA) interview in September 2012, Johnson talked around the couple of questions he was asked regarding Bitcoin. During a later AMA in March 2013 (he does a lot of these), Johnson said he’s “not as well-versed on Bitcoin as [he] should be” and promised to learn more about it. Johnson participated in yet another AMA about one month later, but he didn’t address a followup question about Bitcoin.

Johnson still isn’t claiming to be a Bitcoin expert.

“I wish I were more versed on it,” he told us after his LibertyFest speech. “I wish I understood it better, but I’m to the point now where I’m actually going to put some money into it to try it based on what I understand about it.”

During our brief conversation, Johnson did not reveal any specifics about his prospective investment, but he said the “real awakener” for him with regards to Bitcoin was when Fortress Investment Group, an highly regarded firm, began to express interest in the cryptocurrency earlier this year.

“That opened my eyes,” Johnson said.

Of course, at that point the price of Bitcoin was soaring close to $1,200. In recent weeks, Bitcoin has lost a bit of steam and fallen to less than $400. Invoking the classic “buy low, sell high” logic, Johnson said he feels this is the right time for him to get on the Bitcoin bandwagon.

Though Johnson has become at least somewhat well known through his political career, it was his business acumen that gave him the opportunity to run for office. As his story goes, Johnson started working independently as a handyman in Albuquerque while he was a student at the University of New Mexico in the 1970s. In 1999, he sold the construction company he built out of that initial handyman business for $10 million.

Though Johnson’s interest in Bitcoin is significant, filling his digital wallet is far from the most important thing on his plate right now.

Through a group called Our American Initiative, of which he is the honorary chairman, Johnson is suing the Commission on Presidential Debates, a private group that oversees the three televised presidential debates each election cycle.

Johnson said that any presidential candidate who is on that ballot in enough states to potentially win the election should be able to take part in the debates. During the last cycle, that would have been Obama, Romney, Johnson and Green Party candidate Jill Stein, who was arrested outside one of the 2012 debates for trying to gain access to the debate hall so she could take part in it.

Currently, a candidate must achieve at least 15 percent support in five national public opinion polls to take part in the debates.

If Johnson’s lawsuit is successful, it would clear the way for him to make another run at the White House in 2016. At LibertyFest, Johnson made it clear that he thinks the American public would respond to his ultra-small government politics.

“I believe I would be president today if people would’ve been able to hear what I have to say,” Johnson told the crowd.

If he ever did become president, Johnson said he would certainly promote Bitcoin to the American public. “Especially if I put some money into it,” he quipped.