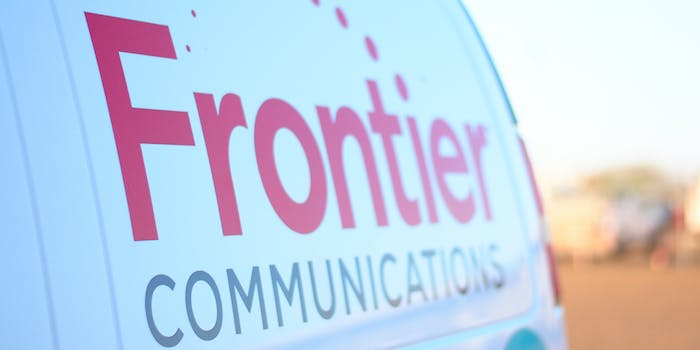 The acting FTC chairwoman said the suit showed how the FCC needs authority over broadband.

Six states joined the FTC in its complaint against Frontier, including Arizona, California, Indiana, Michigan, North Carolina, and Wisconsin.

They allege Frontier advertised and sold internet speeds based on download speeds but it did not provide customers with the speeds they were promised. Instead, the FTC alleges, the speeds “often fell far short of what was touted in the plans they purchased.”

In the complaint, the FTC shows an example of an advertisement and notes that Frontier put a notice in “tiny, inconspicuous print” that internet speeds they were advertising might not be available in all locations and that “maximum speed for service to your location may be lower than the maximum speed in this range.”

However, the FTC and states say, when Frontier sends advertisements to a customer’s address they “have access to information indicating that it is unable to provide” the internet speed tier.

“In numerous instances, Frontier has sent consumers advertisements for DSL Internet service at speed tiers that Frontier could not provide to them,” the complaint reads.

The complaint also notes that since customers give their address to customer service representatives and salespeople, Frontier would know they were not able to offer certain speeds at various addresses. Despite this, “Frontier or its sales representatives have offered consumers, and those consumers have accepted, subscriptions for DSL Internet service at speed tiers that Frontier could not provide to those consumers,” the complaint says.

The complaint says Frontier has been advertising and selling internet service at speeds that Frontier “did not, or often could not” provide to customers since January 2015.

In a statement to the Daily Dot, a spokesperson for Frontier called the lawsuit “without merit” and said that it would “present a vigorous defense.” The spokesperson added: “Frontier’s DSL Internet speeds have been clearly and accurately articulated, defined and described in the Company’s marketing materials and disclosures.”

Acting FTC Chairwoman Rebecca Slaughter said while the lawsuit against Frontier was important, it showed why the Federal Communications Commission (FCC) needs authority over broadband providers, which was taken away when the Republican-led agency repealed net neutrality rules in 2017.

“Today the @FTC and several state partners sued Frontier Communications for lying about the broadband speeds it offered to its customers. This is an important action to hold a broadband provider accountable for the promises it makes about its service,” Slaughter wrote in a series of tweets, adding: “As important as this case is, it also shows why the FTC can never fully fill the regulatory gap left in the wake of the repeal of Net Neutrality at the @FCC, the expert agency on telecommunications services.”

Slaughter continued by saying oversight from the FCC “may have prevented these violations” from Frontier.