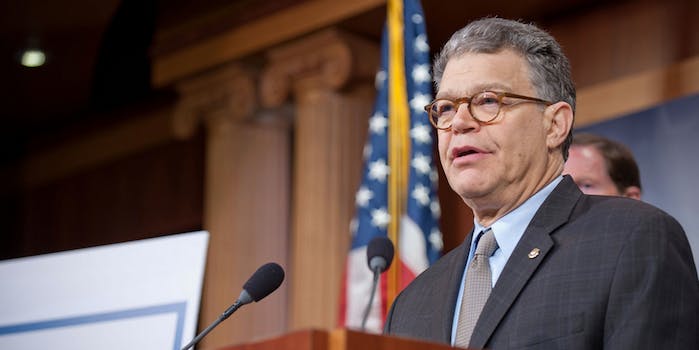 Calling it the “free speech issue of our time,” Sen. Al Franken (D-Minn.) has launched a new online campaign to fight for the preservation of net neutrality, which currently faces a challenge from the Federal Communications Commission.

This week, Franken and the Progressive Change Campaign Committee launched #NoSlowLane, a campaign against proposed FCC rule changes that critics claim would abolish net neutrality and pave the way for big companies and sites to pay for faster distribution of their content online.

A proposal from the FCC would allow video or VoIP companies, like Netflix or Skype, to pay Internet service providers (ISPs) for faster, uninterrupted broadband service—a so-called broadband “fast lane.” Many ISPs have sought compensation from these companies for the enourmous amounts of bandwidth they require and say such a rule change is necessary to provide optimal service to customers.

But Franken, who’s emerged as a leading legislative proponent of net neutrality, argues that the proposed FCC rule change will hurt Internet consumers in the long run. In a video released on YouTube, he says giving companies the ability to pay for premium access will stifle smaller companies and content providers who’ve historically enjoyed a level playing field online.

“The astounding innovation that accompanied and accelerated this [Internet] revolution was possible only because of the basic architecture of the Internet: Net neutrality,” says Franken in the video.

As an example of the innovation made possible by net neutrality, Franken points toward the success of YouTube itself. He notes how the video service came into existence at the same time as Google Video, a similar service. Although YouTube was a meager start-up and Google was already an established tech giant in 2005, YouTube was able to triumph over the inferior Google Video, in part, because it enjoyed equal distribution access. Google, of course, eventually bought YouTube.

Franken says giving priority access to established companies will only increase their strength and squeeze out competition. Furthermore, he said, the cost of paying for premium Internet access will likely be passed on to consumers.

“This means that big corporations will be able to get their content delivered faster,” he said. “Mom and pop stores would lose even more ground to corporate giants. Big media companies will be able to get their version of the news to consumers faster. And we’ll end up paying for it with higher rates for Internet service and new obstacles to access the content that we want.”

FCC Chairman Tom Wheeler argues that Franken and others have mischaracterized his proposal. Addressing the National Cable & Telecommunications Association convention in Los Angeles last week, Wheeler said the new rules did not call for a wholesale gutting of net neutrality. Rather, he insisted that the proposal is designed to alleviate the infrastructure burden posed by companies like Netflix. He said fees would be determined by the FCC on a case-by-case basis.

“We will not allow some companies to force Internet users into a slow lane so that other with special privileges can have superior service,” he said.

Photo by Senate Democrats/Flickr(CC BY 2.0)