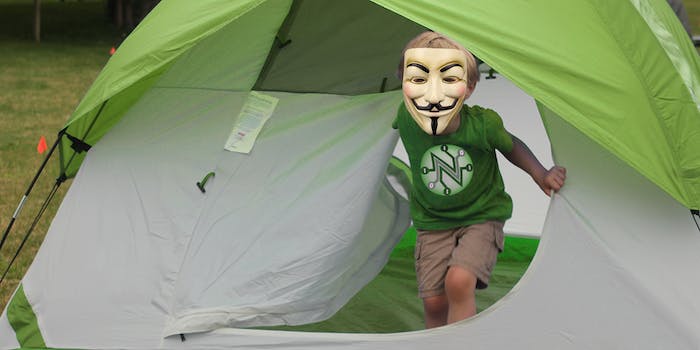 Unless something drastic is done soon, they say, the U.S. could have a “two-tier” Internet setup, where customers could be charged extra to visit certain sites or services that are forced to pay Internet service providers more money for a broadband “fast lane”—something net neutrality advocates believe threatens the Internet’s democratic nature by handing over control to telecommunication corporations.

So, to fight against the net neturality proposal, activists are occupying the FCC.

A group of activists affiliated with Internet freedom group Fight For the Future (FFTF) have pledged to camp out in front of the FCC “until they drop the proposal,” FFTF spokesperson Kevin Huang told the Daily Dot.

The protest has already started, but the formal rally begins at 5:00 Wednesday, and could go indefinitely—or at least until May 15, when the FCC is expected to vote whether to accept the proposal. Huang said eight people have pledged to camp out nightly, and the group expects the number to grow.

Lots of journalists on scene at FCC building in DC. Activists regrouping at 5pm to demand #netneutrality. pic.twitter.com/moDF2SKBys

A number of populist movements are outraged by the FCC’s proposal, with various petitions gathering hundreds of thousands of signatures, and public interest groups encouraging people to tell the FCC how they feel about the net neutrality proposal directly. But there’s been little physical presence so far, which wasn’t the case with previous Internet-enraging issues like National Security Agency (NSA) spying and the Stop Online Piracy Act (SOPA).