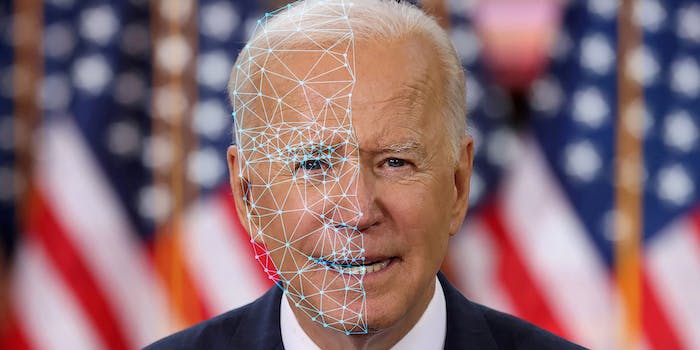 'It is critical the Biden administration and Congress take action now.'

The findings of a recent report by the Government Accountability Office (GAO) regarding the federal government’s use of facial recognition are renewing calls for President Joe Biden to ban the technology.

The GAO’s report, which was published on Tuesday, found that 20 federal agencies either owned or used facial recognition technology. It also found that six agencies had used it amid Black Lives Matter protests against police brutality and racism in 2020.

The report also noted that there was a lack of oversight from the agencies about how employees were using facial recognition. The GAO said 13 agencies reported to them that they didn’t know what non-federal facial recognition systems were being used by employees.

The GAO recommended that the agencies “implement a mechanism to track what non-federal systems are used by employees, and assess the risks of using these systems.”

Facial recognition technology has been found to have a racial bias, and there has long been a push to ban it from being used by the government and police. In the absence of movement at the federal level, cities and states have moved to place restrictions on the technology’s use.

Now, the report’s findings are renewing previous calls civil rights and tech advocacy groups have made to Biden to ban the federal government from using facial recognition.

Earlier in 2021, more than 35 civil rights groups including the ACLU, the Electronic Frontier Foundation, Amnesty International, the Electronic Privacy Information Center (EPIC), and the Surveillance Technology Oversight Project (STOP), and others urged the president to place a moratorium on government use of the technology and support a bill in Congress that would do the same.

Now, those same groups say their message to Biden has been cemented in the wake of the GAO’s report.

“It’s alarming that six federal agencies targeted facial recognition at BLM protesters. In a democracy, police should not be allowed to use surveillance to punish dissent,” Albert Fox Cahn, the executive director of the Surveillance Technology Oversight Project, said in a statement. “While the GAO’s findings are alarming, their recommendations don’t go far enough. We don’t need facial recognition regulations, we need a full ban. We can’t wait for Congress to act, so we are calling on President Biden to issue a moratorium on federal facial recognition.”

That environment, Scott said, showed a need for Biden to suspend the technology’s use by federal law enforcement.

“The GAO report supports the calls by EPIC and other organizations to ban or suspend the federal law enforcement’s use of facial recognition,” Scott said. “It is critical the Biden administration and Congress take action now because federal agencies clearly do not take seriously the risks posed by the use of such a dangerous surveillance technology.”

Scott added: “It is an incredible oversight, given the attention facial recognition technology has received, that 13/14 agencies asked about it are not even tracking which commercial facial recognition products their employees use.”

The previous calls for Biden to take action urged him to take executive action to stop federal government use of the technology and other biometric technology. It also called on him to support the Facial Recognition and Biometric Technology Moratorium Act.

That bill was reintroduced in June by lawmakers in the Senate and House of Representatives. The bill would put into effect a moratorium on the use of the technology by the federal government that could only be lifted by an act of Congress, among other things.