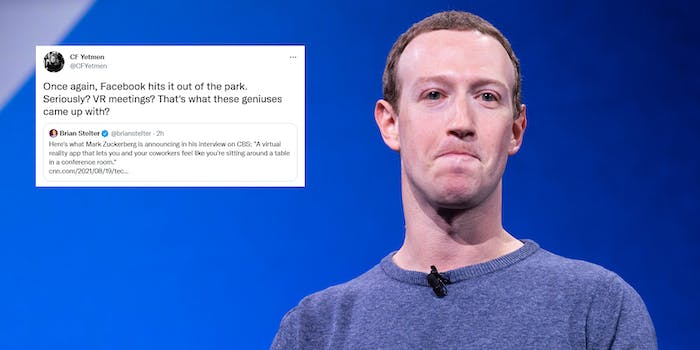 ‘It’s like the sh*ttiest possible version of the Matrix’: Facebook’s ‘special announcement’ was a VR office

'That's what these geniuses came up with?'

Yesterday, CBS News hyped up its exclusive interview with Facebook CEO Mark Zuckerberg by promising a “special announcement about the future of Facebook.”

Turns out that “special announcement” was just about a new product. Specifically, the social media giant announced that it was launching “Horizon Workrooms,” a virtual reality space to hold work meetings using the company’s Oculus product.

Here’s how Facebook described it in a press release:

Workrooms is a virtual meeting space where you and your colleagues can work better together from anywhere. You can join a meeting in VR as an avatar or dial into the virtual room from your computer by video call. You can use a huge virtual whiteboard to sketch out ideas together, bring your computer and keyboard into VR to work together with others, or just have expressive conversations that feel more like you’re together in person.

Predictably, the announcement from the company that it was launching something that is essentially a way to interact with co-workers who look like Mii avatars on the Nintendo Wii wasn’t exactly met with widespread adulation.

“Once again, Facebook hits it out of the park. Seriously? VR meetings? That’s what these geniuses came up with?” one Twitter user wrote.

“Wow, it’s like the shittiest possible version of the Matrix,” another person joked.

“Do you love Zoom meetings but think, ‘I’d like them even more if they gave me migraines’?” one Twitter user chimed in with.

They were far from the only ones who commented on Facebook’s VR workrooms. As one person tweeted, “the jokes write themselves.”