The harassment hasn't stopped, and it's not going to unless Facebook finds a fix.

Try as it might to improve a tricky policy integral to its platform, malicious users are still flagging legitimate Facebook accounts as fakes. The issue plagued the LGBTQ and drag community late last year, as hundreds of anecdotal reports popped up that user accounts had been suspended for violating Facebook’s since-revised Terms of Service agreement.

But the revisions, largely an overhaul of problematic language around “legal names” and an unevenly enforced tool for reinstating an account by providing proof of an IRL identity, aren’t cutting it. This week, it was widely reported that the Native American community is the latest marginalized group to have their identities called into question on Facebook. As the Electronic Frontier Foundation (EFF) reports:

Lone Hill isn’t the only Native person who has been affected. As Aura Bogado at Colorlines points out: “The company appears to have been questioning certain Native users since at least 2009,when it deactivated Parmelee Kills The Enemy’s account. More recently, on Indigenous Peoples’ Day, Facebook deleted a number of Native accounts.” She’s referring to the takedown of Shane Creepingbear’s account.

But why is this still happening at all?

Last year, Facebook suggested that one user abused its reporting tool to flag thousands of accounts, including many outspoken members of the LGBTQ and drag communities. We covered that situation extensively at the time and tracked down one anonymous user who claimed responsibility for Facebook’s accidental real names crackdown. In light of those events, Facebook did implement some well-meaning changes to its identity policy, but those solutions remain oversimplified, unevenly implemented, and most puzzling of all, constructed to clean up the mess of a few bad seeds rather than removing the tool these same users are exploiting.

So here’s how we think Facebook could fix it.

The tool ostensibly exists so that Facebook users can report actual abuses, like an account impersonating someone’s identity. In that situation, Facebook’s rules specify that the affected user issue the report personally. Obviously users like @RealNamePolice are abusing Facebook’s existing set of tools and possibly even doing so without being logged in to a Facebook account, making their actions impossible to trace. Requiring that reports come from existing Facebook users so the harassment can be tracked is both simple and easy to implement.

It doesn’t currently violate Facebook’s Terms of Service if a user abuses Facebook’s own tools to target specific groups, like the LGBTQ and Native American users. Hey, maybe it should! Facebook should be able to identify the users reporting accounts like Dana Lone Hill. In what possible scenario could a single user reporting huge pockets of Facebook accounts possibly do more good than harm? The tool obviously isn’t working as intended, instead being leveraged for harassment—something that is against Facebook’s terms. 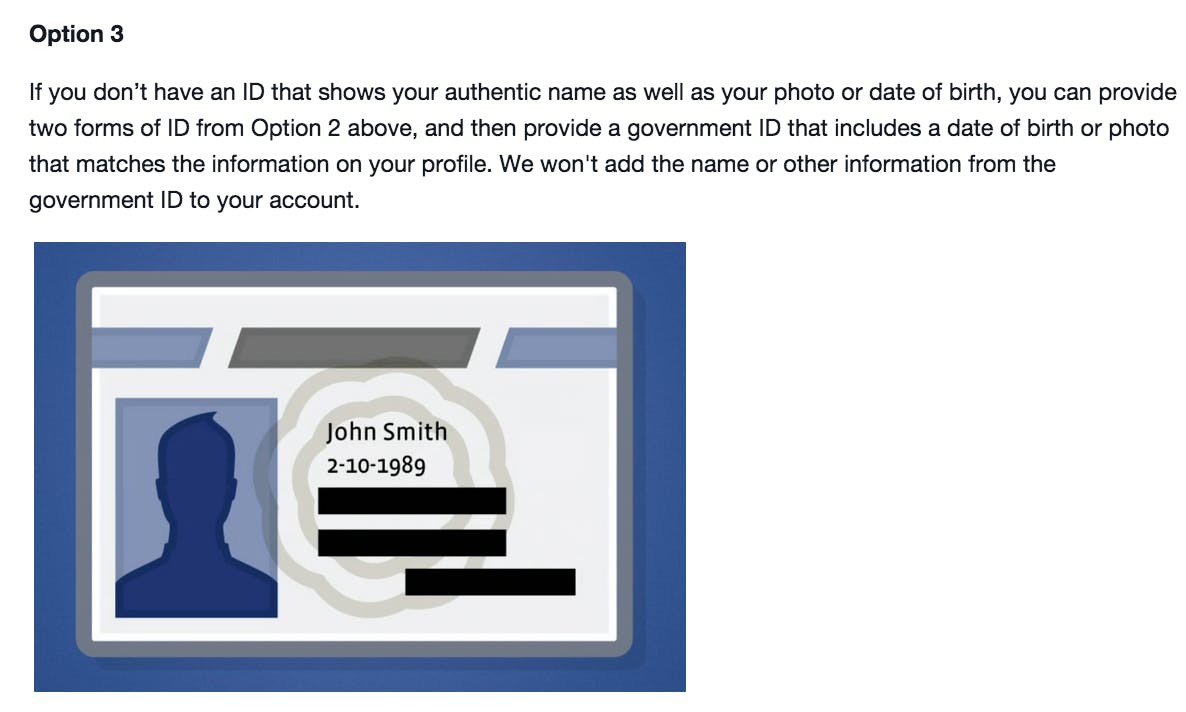 Facebook is really trying to be flexible with how it allows users to help it identify them, but it just doesn’t work for some of its platform’s most vulnerable communities. Rather than straight-up requiring a passport or driver’s license, the social network now accepts two forms of less formal identity, like a library card and a piece of mail, for instance. The thing is, those forms of name verifications will most often reflect a legal name, which, like we’ve established, is not always the same as “the name they use in real life,” which is what Facebook is really trying to nail down here.

Here’s the statement that a Facebook spokesperson issued in response to my questions around its policy’s more problematic nuances:

“We are committed to ensuring that all members of the Facebook community can use the names that they use in real life. Having people use their authentic names makes them more accountable, and also helps us root out accounts created for malicious purposes, like harassment, fraud, impersonation and hate speech. Over the last several months, we’ve made some significant improvements in the implementation of this standard, including enhancing the overall experience and expanding the options available for verifying an authentic name. We have more work to do, and our teams will continue to prioritize these improvements.”

Facebook reached out to me to clarify the efforts its made to improve the names policy and does genuinely seem to mean well. That said, wouldn’t these solutions make things easier for everyone? Facebook is still unwittingly suspending legitimate profiles, probably many more than we even know about. When the policy blew up in the queer community last year, Facebook’s haste to restore an account was a direct factor of drumming up bad press or “knowing a guy” (drag queens were trading Facebook @fb.com employee email addresses like Pokémon cards).

Facebook is in a tough spot. Unlike quirkier social networks like Twitter or Tumblr where pseudonyms thrive, Facebook users overwhelmingly operate a single account tied to their real-life identity. That notion of true identity is the company’s lifeblood, and it’s what makes users feel relatively insulated from the systemic harassment that plagues other social platforms.

It’s understandable that the company is reluctant to mess with a good thing, especially when that good thing is 1.4 billion monthly active users strong. But identity is as important to Facebook’s users as it is to the company itself. It’s time to adjust the system to reflect that.