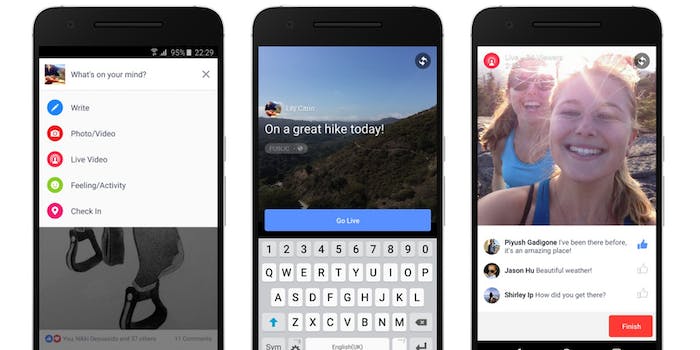 Facebook Live Video is finally making its way to Android

Streaming video was a hot trend at the start of 2015—so hot that Facebook launched its own streaming feature called Live Video. But now it’s 2016, and the trend has died down—just in time for Android users to finally gain access to Live Video.

The real-time streaming service, built into the social network’s mobile app, is accessible when you begin creating a post on the News Feed. Tapping “What’s on your mind?” will display a Live Video icon, which will start the broadcast. Users can write a description for the video and select an audience segment for targeted broadcasting before going live.

During the stream, you can see the number of viewers, friends who check in, and comments from viewers. Completed broadcasts are saved and posted to your timeline for later playback.

Facebook said in its post announcing the news that more than half of the people watching live video do so on Android devices, so it’s strange that this update took so long. Android devices were noticeably excluded from the full rollout of Live Video to all users back in December.

Live Video’s expansion was gradual at first. It began as a feature only available to celebrities, with famous faces like Dwayne “The Rock” Johnson, Martha Stewart, and Serena Williams using it to stream video to fans. It since expanded to cover all users and, with today’s update, the two largest mobile platforms.

Facebook’s focus on Live Video reflects its affinity for multimedia, which it has turned into a new focus of the service. The social network claims to tally billions of views every day, though there are some questions as to the legitimacy of those figures.