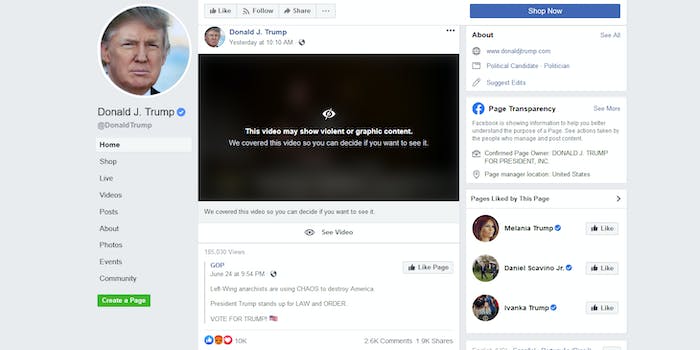 The video was shared by Trump on Thursday and also flagged by Facebook.

A video shared by the official GOP Facebook page that was subsequently shared by President Donald Trump has been given a warning label by the social media giant because it “may show violent or graphic content.”

The video, which the GOP account posted on Wednesday, leans into Trump’s shouting of “LAW & ORDER” amid—mostly peaceful—protests across the country against police brutality and racism following the police killing of George Floyd.

It shows a number of politicians talking about defunding the police and links the protests to Marxism while ominous music plays. In the footage, it includes a video of a New York City Police officer being hit by a car in early June.

CNN reported the officer was responding to a pawn shop break-in.

The caption for the video reads: “Left-Wing anarchists are using CHAOS to destroy America. President Trump stands up for LAW and ORDER. VOTE FOR TRUMP!”

A Facebook spokesperson told the Daily Dot they flagged the video because it included the hit-and-run clip.

“As with other videos that feature this graphic hit and run, we’ve included a warning screen so people are aware the content may be disturbing,” the spokesperson said.

The social media giant does add warning labels to some posts so that they are “not available to people under the age of eighteen and so that people are aware of the graphic or violent nature before they click to see it,” according to its community standards.

Facebook has taken heat recently for having a more lax approach to Trump’s posts. Other social media companies have fact-checked, or placed warnings, on several posts the president has made.

Earlier this month, employees at the social media giant staged a virtual walkout over the hands-off policy regarding the president’s posts.