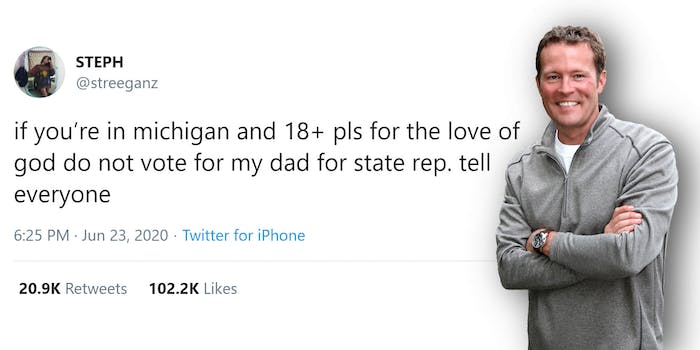 Daughter of Michigan Republican urges people to vote against her dad

'For the love of god do not vote for my dad for state rep.'

Political campaigns can wreak havoc on a family. Especially when a candidate’s child openly opposes them.

That’s the predicament in which Robert Regan, Republican candidate for Michigan State Representative, finds himself.

Regan is a red-blooded Republican who previously described himself as “so conservative that he makes Rush Limbaugh look like a liberal” and boasted about being the first candidate to support President Donald Trump. His issues include making English the official language in Michigan, opposing all forms of immigration reform (which Regan calls “a codeword for amnesty”), opposing abortion, and restoring Michigan’s constitutional militia.

Those issues don’t sit well with Regan’s daughter, Stephanie (@streeganz). On Tuesday, she tweeted a simple message regarding her father’s campaign: “If you’re in Michigan and 18+ pls for the love of god do not vote for my dad for state rep. Tell everyone.”

The tweet exploded, racking up more than 100,000 likes and 21,000 retweets. Stephanie posted a follow-up tweet yesterday: “Since so many people are asking it is Robert Regan! Do a quick fb or google search to find info about his campaign. I don’t feel safe rn sharing further information regarding his beliefs, but please look him up and just read for yourself.”

Stephanie confirmed her identity to the Daily Dot via Twitter. She did not immediately respond to request for comment about the response to her tweet, but she did address it separately on Thursday morning.

“My dms and notifs are crazy it’s hard to reply but pls know i appreciate u!!!!” she wrote. “I didn’t think anyone past hometown friends would see this but this is more than political beliefs!! ppl see a familiar name & vote. READ. GOOGLE.”

Regan’s campaign did not immediately respond to the Daily Dot’s request for comment regarding Stephanie’s viral tweet. However, Regan’s Democratic opponent, Bill Saxton, also retweeted Stephanie’s message with his own commentary.

“I want to commend @streeganz for making the difficult choice to speak out against her dad (one of my opponents) and his beliefs,” he wrote. “It takes extraordinary courage to make a post like this.”

The “issues” page on Saxton’s website is far less exhaustive than Regan’s, but they make clear his passion for providing small business support, robust education funding, and clean drinking water to Michiganders.

Update 9:40am CT, June 26: In a statement posted to Facebook, Robert Regan addressed the matter, saying he was proud of his daughter for speaking out.

But he also blamed her opinions, in a statement to a local outlet, on left-wing indoctrination.

“When they go off to college, quite frankly they get involved with these Marxist, socialist universities and they start getting indoctrinated with things that are completely polar opposite from where you raised them,” he said.