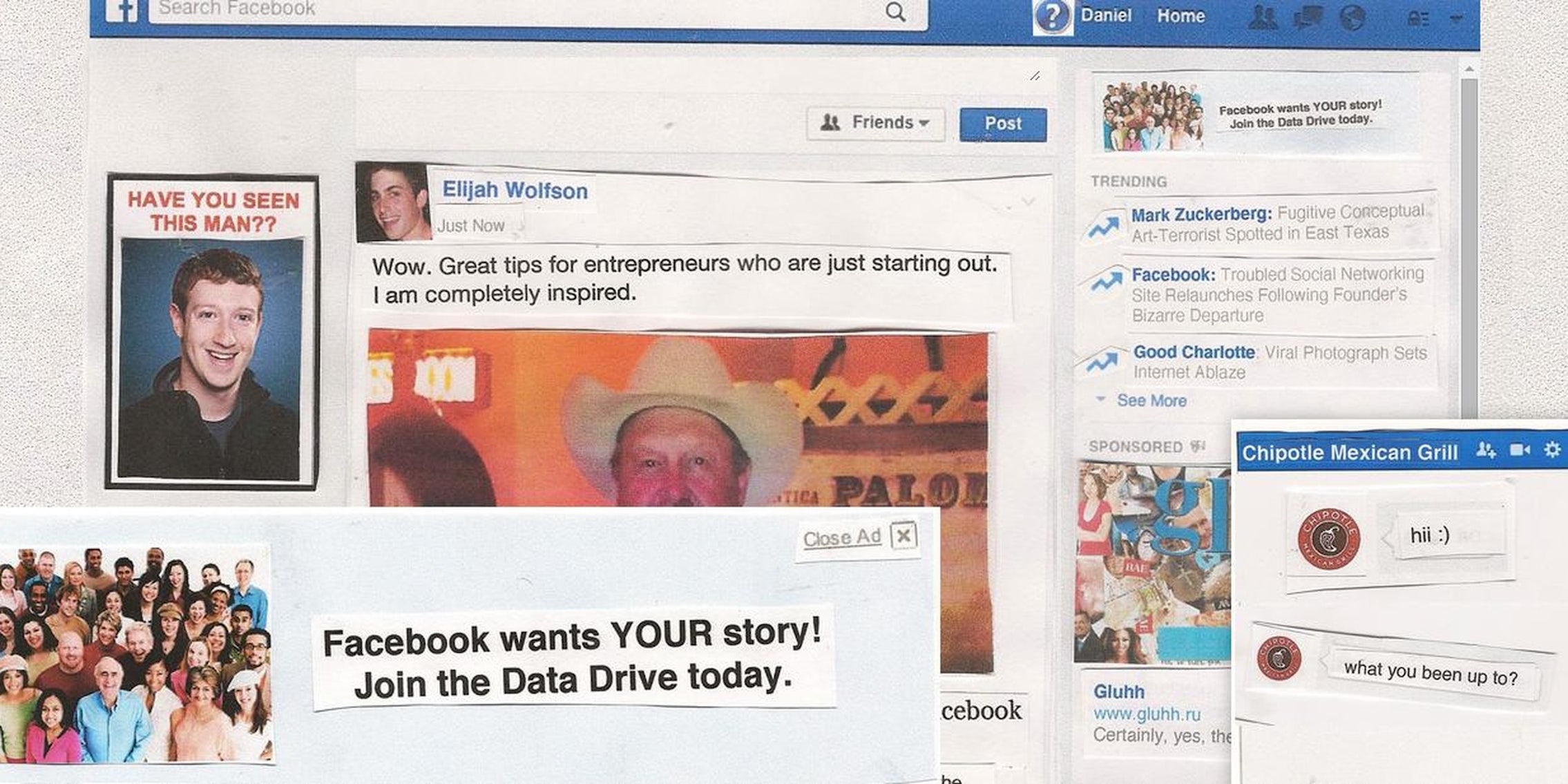 It's the future we all fear.

It’s 2016 and Mark Zuckerberg is on the lam. He’s made off with Facebook‘s data, and the social network is calling on its users to restock the site with personal information.

This is the world of the Data Drive, a digital art project that imagines an alternate reality in which Zuckerberg goes rogue. The dystopian, not-so-distant future in which the cash-strapped social network is run by a mattress tycoon is presented as a Facebook feed made entirely out of paper and glue.

If you put the Clickhole staff in a high school art class, this is what you would get. 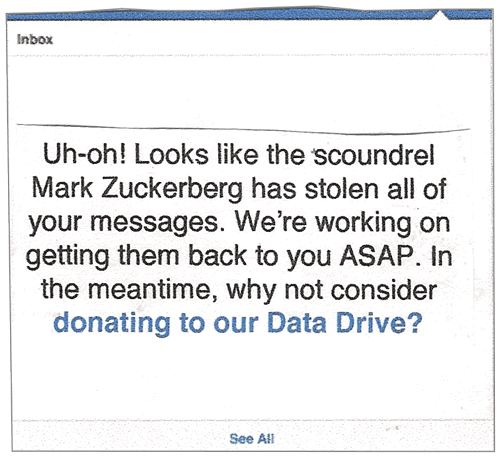 Connoisseurs of the weirder side of the Web will likely recognize the art collage aesthetic of the Data Drive as being similar to a now-defunct Tumblr, the Printed Internet.

The resemblance is no coincidence; both come from the mind of freelance writer Daniel Kolitz.

“I stopped updating [the Printed Internet Tumblr] about a year ago, but this past January Adrian Chen reached out to see if I’d be interested in using my blog’s aesthetic to tell a larger, interactive story,” Kolitz told the Daily Dot. “And I was!”

The site bares all the typical markings of Facebook as we know it today, but tilts toward absurdist as the story of Zuckerberg’s fleeing reveals itself. Facebook, once flush with data, now has none and it needs its users to pitch in.

The site will do just about anything it can to recollect 100 petabytes of data, which it needs in two weeks’ time: It’s hosting a telethon with other Sillicon Valley personalities like Dick Costolo and giving away rewards including a Facebook tote bag, a nice umbrella, or a fun font for status updates.

Meanwhile, the rest of the world seems largely unchanged. The Internet is abuzz over a photo of one of the Madden brothers from punk band Good Charlotte—no one is quite sure which sibling.

The Data Drive doesn’t simply skewer Facebook but plenty of the Web’s top destinations beyond the social network—thanks primarily to their prominence in its warped News Feed. Vox happily explains the Zuckerberg situation while Gawker’s Defamer blog publishes embarrassing information revealed by the former Facebook CEO’s decision to upload everyone’s data to the Pirate Bay.

The entirety of the Data Drive is pitch-perfect parody, thanks in part to Kolitz’s own consumption of content. “It was kind of a free-associative process, guided by my own pet peeves and interests (or, I guess, disinterests),” he explained. “The goal, personally, was to create as persuasively diverse a Web-simulacrum as I could.”

Many parts of the Data Drive work because they touch so closely to the true state of the Web. Beyond just the overarching fear and distrust many people have about what happens with their data when surrendered to tech giants like Facebook and Google, even the smaller details touch on the worst possible outcomes for our digital future.

Brands constantly chime in on pop culture and try to be more personable on social media, and Facebook is gearing up its Messenger platform to give brands a new way to communicate with customers. In the Data Drive universe, a chat box in the corner presents a very chatty brand—Chipotle Mexican Grill—doing its best to connect while also making you aware of an offer for a free medium drink with the purchase of a burrito bowl (at participating locations only).

Vox is now owned by Facebook in the Data Drive, though it’s not concerned about the appearance of a conflict of interest. Meanwhile, in this timeline, Vox is supposedly being eyed up for purchase by Comcast.

The branches are far enough out there to be funny, but the roots are still planted firmly in reality.

The entire project was about five months in the making, according to Kolitz. For his part, he said “the writing took about two months; the collaging, about a month and a half.” Coding and programming, the job of Stupid Hackathon founder Sam Lavigne, finished up in June.

Now that the Data Drive has been published, Useless Press has more up its sleeve.

“This month we’ll be publishing one new thing every week, and then we’ll move to a slower schedule and publish things once a month,” Lavigne said. “The projects will be varied and weird.”

As if you would expect anything less.

Screengrab via the Data Drive