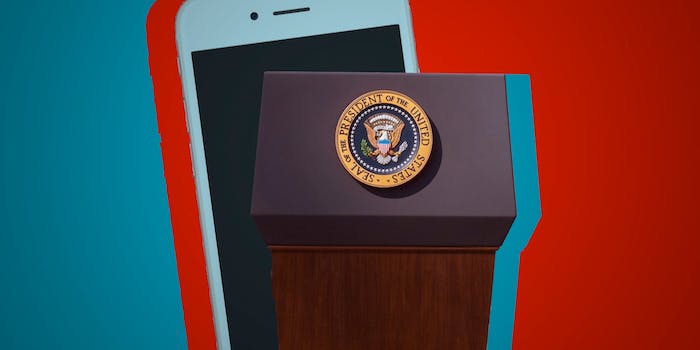 The nation’s leading technology associations is urging the remaining presidential candidates to champion cybersecurity, data privacy, and the Internet of Things in their campaigns for the White House.

In an open letter, the leaders of the Consumer Technology Association, the Internet Association, the Information Technology Industry Council, and 10 other groups advise presidential candidates to promote “policies that protecting privacy” while “ensuring the free flow of data across borders;” “recognize the importance of encryption as a critical security tool;” “support robust freedom of expression on the open Internet;” and “adopt policies that pave the way for high-speed, next-generation broadband deployment.”

“Time and again,” the letter says, “collaboration between innovative businesses and inspirational national leaders has overcome insurmountable odds, from enabling democracy, to combatting disease and hunger, to going to the moon and beyond.”

Neither Trump nor Clinton has a tech-friendly position on unbreakable encryption, a growing technological phenomenon that government investigators say is preventing them from catching criminals and terrorists.

Trump sided with law enforcement over the technology community in the fight over the dead San Bernardino shooter’s locked, encrypted iPhone, urging his supporters to boycott Apple until it helped the FBI access the phone. And while Clinton has said that she wouldn’t mandate holes in encryption designed to ensure tech companies’ ability to comply with search warrants, she has echoed law-enforcement rhetoric about Silicon Valley needing to compromise with the government to find a solution.

Clinton also mocked concerns about anti-encryption policies by saying, “You’re going to hear all of the usual complaints, you know, freedom of speech, et cetera.”

Clinton can, however, tout a strong commitment to promoting online freedom of expression more generally, having championed the issue as secretary of state, despite criticism that she didn’t go far enough.

Trump, meanwhile, has said that he wants to explore “closing up the Internet in some way” to stem the tide of ISIS propaganda.