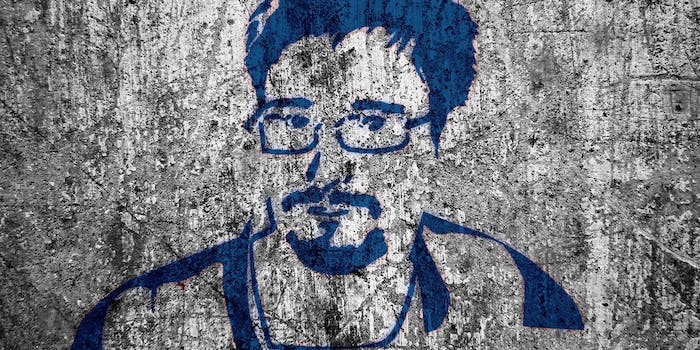 “Security is not the only value that Americans treasure."

Snowden’s PDF 2014 appearance marks the one-year anniversary of the first National Security Agency leaks stories, which continue to this day.

Appearing via video call from Moscow, Snowden spoke with John Perry Barlow, cofounder of the Electronic Frontier Foundation, in front of a crowd of hundreds gathered in downtown Manhattan. This was the NSA leaker’s first public appearance since his NBC Nightly News interview with Brian Williams late last month.

An audible buzz in the audience preceded his appearance, and an explosion of applause erupted when he appeared on screen.

“We’ve seen a growing appetite of control,” Snowden said. “When this started, none of us really had a full picture of what the government was doing, of what they’d entitled themselves to do without asking the public or even asking the majority of Congress. There’s no press, there’s no public advocate.”

“National security means the security of our founding principles,” Barlow said to Snowden. “It’s not our borders, it’s not our culture, it’s not anything except those founding documents that we still profess to believe in. If we’re insecure in our beliefs, that’s a threat to national security.”

“Security is not the only value that Americans treasure,” Snowden added.

Snowden: “We don’t have to ask for our privacy. We can take it back.” Points to @resetthenet tools. #PDF14

Snowden, who carried the same carefully-measured tone and argument that struck so many viewers of his NBC interview, spoke at length about how the NSA’s technological and legal ability to engage in mass surveillance does not count for much if the activities are unjust.

“Just because we can do something, doesn’t mean we should, he said.”

What can you do? Snowden: Everyone needs to vote and we need to not just vote but campaign for the public interest #PDF14

Snowden: “Lockheed Martin, Booz Hamilton, Boeing have more money, but they each only get one vote. YOU HAVE TO VOTE.” #pdf14

“The way global surveillance works, they’ve changed the game from where law enforcement investigates criminals, or intelligence investigates targets threats, to investigating citizens, to investigating all of us,” Snowden told the crowd. “That’s a real problem because we fought a war to have protections like our Fourth Amendment that says you can’t search or seize communications in the first place in a huge database just because you want to know what’s going on with us.”

The conversation ended with loud, extended applause that led a smiling Snowden to add one last message to the audience.

“My biggest fear was that no one would talk about this. But the people in this room today, the conversation we are having, shows how wrong I was. I’m so thankful for that. We’re not going to turn the page overnight. But the fact that we’re talking about this shows that we will get a better and more accountable government. All I did was show the public documents that they should have seen. It’s up to you guys to end this conversation. Seeing this level of support just encourages me that you will.”