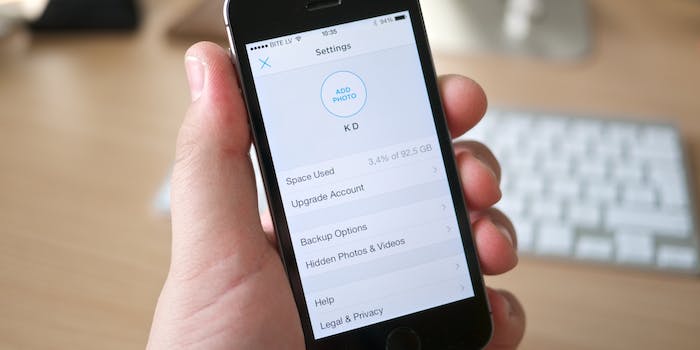 The cloud service still only offers 2GB of free storage, the lowest of its competitors.

If you use Dropbox, the 2GB of cloud storage they give you for free may not be cutting it anymore. Sure, it was good back in 2008 when the service launched, but these days that won’t even hold a HD movie. Thankfully, Dropbox has given its users another option, letting you purchase 1TB of storage for $10 a month.

With the storage bump comes a selection of new features for Pro users, including links that expire, password-protected links, and read-only mode for shared folders. Dropbox Pro also comes with remote wipe, which lets you delete Dropbox items on devices that are lost or stolen, while still keeping those items backed up in the cloud.

The company, which has over 300 million registered users, is still only offering 2GB of storage for new sign ups, the lowest out of all its competitors’ free offerings. Google and Microsoft give away 15GB of storage when you sign up for Drive and OneDrive respectively—enough storage for most people to not worry about running out.

While 2GB a month may be frustrating, at least it’s not as bad as Amazon, who is charging $500 a year for 1TB of storage. Because that’s totally normal.