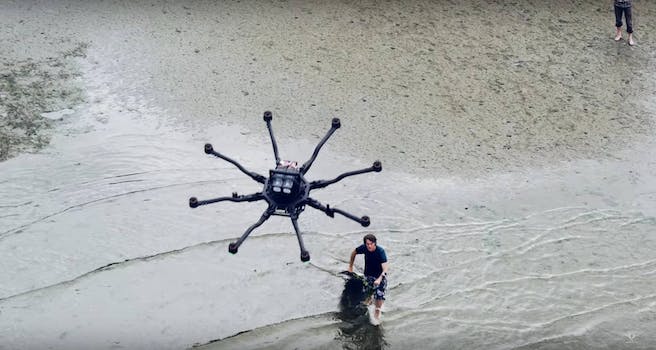 No waves, no problem when you have a drone

Drones have quickly become a common sight in the sky and promise all sorts of potential uses, including some unexpected ones like, say, pulling a surfer across the water.

The folks at Freefly Systems, a cinematography company that specializes in camera movement systems and camera stabilizers, took one of its drones out to sea with a rider attached for a high-tech version of kitesurfing that the company calls “dronesurfing.”

The Freefly ALTA 8 acts as the kite, though it makes for a pretty pricey one. The heavy lift drone costs a cool $17,495, and is capable of carrying payloads—including camera rigs—weighing up to 20 pounds.

It doesn’t make for the most affordable hobby in the world, but it’s hard to argue with some of the impressive shots the high-flying camera captures.

Turns out drones are good for much more than just delivering packages (and burritos).