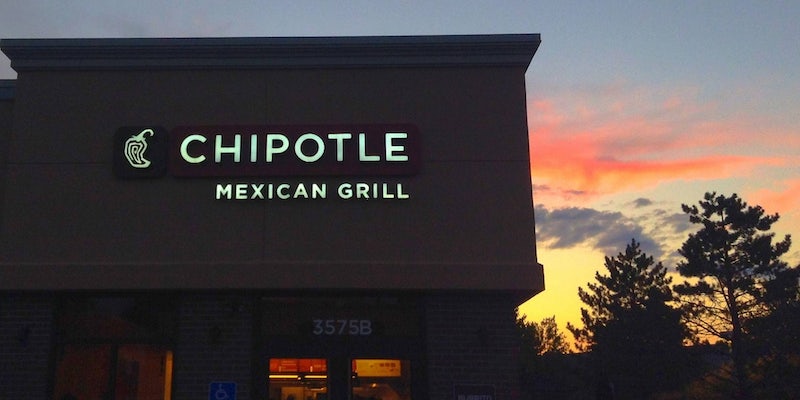 A match made in heaven.

An idea born at least a thousand times in the minds of stoned college kids across the nation is coming true: Chipotle and Google parent company Alphabet are teaming up to deliver burritos via drones.

The experimental service is set to launch this month on the campus of Virginia Tech and will be run by Project Wing, an arm of the old Google X research and development facility that is now under the Alphabet umbrella.

Project Wing will make use of hybrid drones that can both glide through the air like a plane or hover in place like a helicopter. The unmanned aircraft will make deliveries from a Chipotle food truck, where they will be equipped with their payload and given coordinates for delivery, though it won’t be open to the public.

The vehicles will hover above their destination and lower the food down to the waiting patron with a winch—assuming the parcel remains intact during the course of the trip. Because of regulatory rules, drones aren’t allowed to fly directly over people, so participants will be shielded.

If anything goes wrong along the way, human pilots will be on hand to override the automated navigation system.

The Federal Aviation Administration (FAA) approved the experiment—which will only run for a few weeks—and it will be provided data from the test run to analyze potential uses for unmanned aerial systems (UAS), to develop new rules and regulations, and to eventually integrate the devices into the national airspace.

The FAA instituted new rules regarding commercial drone use on Aug. 29, and the Project Wing and Chipotle collaboration will be one of the first to test the possibility of automated deliveries via drones.

A spokesperson for Project Wing told the Daily Dot it will be working with the Mid-Atlantic Aviation Partnership (MAAP), which runs an FAA test site at Virginia Tech, to conduct this test.  The test site also won’t be open to the public.

Project Wing hopes the test proves to be a stepping stone for further deliveries.

“We’re increasingly optimistic about the potential for UAS to open up entirely new approaches to the transportation of and delivery of goods—including options that are cheaper, faster, less wasteful, and more environmentally sensitive than what’s possible today with ground transportation,” a spokesperson told the Daily Dot.

As for Chipotle’s participation in the project, Chris Arnold, the communications director for Chipotle, explained to the Daily Dot, “When we were approached about this partnership to offer aerial delivery, we thought it would be a great way to see what the prospects might be for that service, and we’re very eager to see how it goes.”

“We are always interested in finding ways to provide our food to customers in ways that are convenient for them—whether that’s online ordering, delivery, or catering to accommodate large groups,” he said.

Hokies, start working up an appetite.