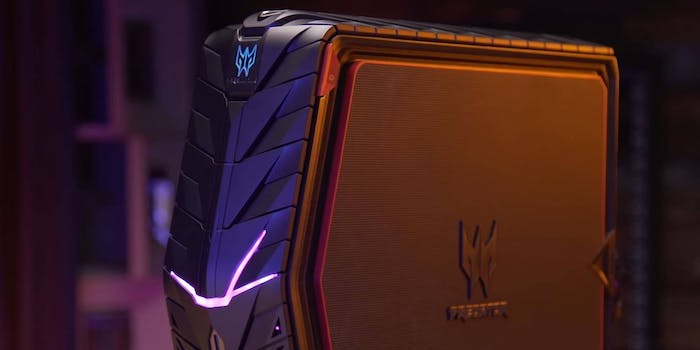 Your computer’s blinking LED is actually a huge security risk

This unbelievable malware attack is right out of a 007 movie.

Researchers have discovered a way to hack into a computer by aiming a drone at the tiny blinking light found on most Windows desktops.

The espionage technique was successfully demoed earlier this month at Ben-Gurion University in Beersheba, Israel. A quadcopter flew up to an office building and started filming the flashing light of a computer inside. After just a few minutes, the drone had exfiltrated sensitive information by recording the morse-code-like patterns of the LED indicator.

It’s a little more complicated than that, thankfully: A computer first needs to be attacked from within via an infected USB or SD card. Once that is in place, however, a stealthy drone is capable of defeating an “air gap” security measure, or a safeguard that takes sensitive computer systems off the internet to keep them from hackers.

This infiltration method doesn’t necessarily need a drone. Sensitive information can be collected as long as the flashing LED sending information is in view.

Here is how it all looks:

“If an attacker has a foothold in your air-gapped system, the malware still can send the data out to the attacker,” Ben-Gurion researcher Mordechai Guri, told Wired. “We found that the small hard drive indicator LED can be controlled at up to 6,000 blinks per second. We can transmit data in a very fast way at a very long distance.”

Air gaps are particularly tricky to infiltrate because they are not connected to the internet and all of its vulnerabilities.

Creating malware that can get into a highly secure offline system is hard enough—finding a way to extract it is nearly impossible. That’s why this outside-the-box method is so interesting.

The tiny LED is capable of transferring data at around a megabyte every half hour. That’s not very fast, but it is enough to steal an encryption key in seconds.

It is also more flexible than other attacks. It’s not limited by distance, and it can gain information from a computer that is asleep.

“The LED is always blinking as it’s doing searching and indexing, so no one suspects, even in the night,” said Guri. “It’s very covert, actually.”

The researchers were able to tell a computer’s LED light to blink so fast it could not be seen by the human eye. They then tried a number of different recording devices to capture the quick flash. They discovered that only a sensor the power of a Siemens photodiode was capable of reading high-frequency light sensing, allowing them to reach a 4,000 bits-per-second data transfer rate.

Thankfully, there are a number of obvious ways to avoid this attack: Keep your computers away from windows, add a tint to your windows, or simply cover that annoying LED indicator.