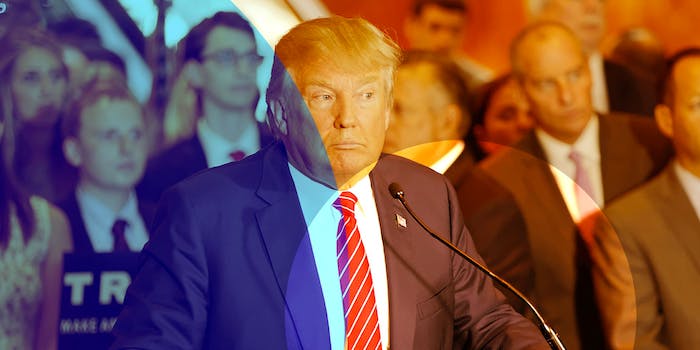 Donald Trump has won the 2016 Republican primary in Maryland.

The state allocates its 38 delegates in two ways. Fourteen are automatically awarded to the overall winner of the state, meaning they all go to Trump. The other 24 are are doled out to the winner of each of Maryland’s congressional districts.

Trump’s win in the Bay State was largely expected. According an average of tracking polls tallied by Real Clear Politics, Trump went into the contest with a 21 point advantage over Ohio Gov. John Kasich.

Maryland was one of five northeastern states holding their primary contests on Tuesday—voters in Connecticut, Delaware, Pennsylvania, and Rhode Island also cast ballots. Going into this week’s slate of elections, Trump is just under 400 delegates away from the 1,237 he needs to secure the nomination.

“If Cruz and Kasich could somehow combine into one super candidate—let’s call him ‘John Cruz—that candidate could beat Trump. The combined share of the two candidates’ vote in Maryland polls has almost always been greater than Trump’s share,” explained data journalism site FiveThirtyEight in its preview of the Maryland election. “But ‘John Cruz’ doesn’t exist; Kasich plays better among moderates and Cruz among very conservative voters.”

On the Democratic side, former Secretary of State Hillary Clinton scored an easy victory over Vermont Sen. Bernie Sanders in Maryland.

This victory in Maryland comes on the heels of Trump’s blowout win over Kasich and Texas Sen. Ted Cruz in the New York primary last week.

According to the collective wisdom of the gamblers using PredictIt’s online betting market, Trump remains the heavy favorite to win the Republican nomination.

The candidates will now head to Indiana for the state’s May 3 primary.