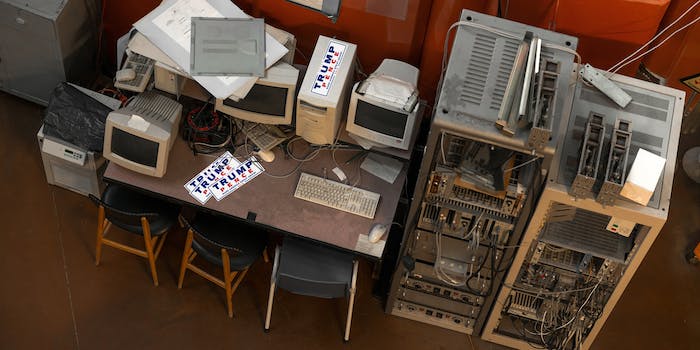 Despite the obvious risks in a heated election season fraught with cyber-peril, Donald Trump is apparently doing very little to secure his own business’ information online.

According to Motherboard, a number of email serves tied to the Republican presidential nominee are running out-of-date software no longer receiving vital security updates and lack “other precautions for keeping hackers out.”

The issues with Trump’s corporate servers were first reported on Twitter by security architect  Kevin Beaumont.

Beaumont told reporters that he was shocked by his findings: a publicly facing email infrastructure rife with security flaws. “During an election where cybersecurity is such a big issue, I was amazed at what I saw.”

Motherboard reports that a number of mail servers linked to the Trump Organization are running end-of-life software, meaning that, with regards to security, the products are no longer supported by their developers.

WikiLeaks has continued this week to release emails from Podesta. The latest batch arrived on Tuesday, a day after Ecuador reportedly cut WikiLeaks founder Julian Assange’s internet connection at its London embassy—Assange’s home for the past four years.