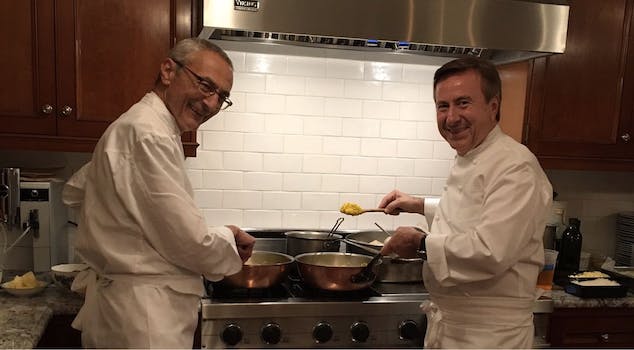 The best revenge is living well.

John Podesta, top Democratic advisor and Hillary Clinton campaign chair, has had a very bad week, as more of his hacked emails poured out of WikiLeaks and trolls allegedly wiped his Apple devices. But the best revenge is living well, so Podesta is making a show of not giving a crap.

On Friday, Podesta trolled WikiLeaks’ Julian Assange, who is still holed up in an Ecuadorian embassy in London, with a series of tweets about delicious risotto:

2. This time with the fabulous Chef @DanielBoulud for Tim Kaine & the Hillary Victory Fund. pic.twitter.com/05Q8Iiq02r

3. I bet the lobster risotto is better than the food at the Ecuadorian Embassy. pic.twitter.com/zyViu1R4UL

Podesta was in the enviable position of cooking with Daniel Boulud, a top New York chef whose most famous restaurant, Daniel, is pretty hard to get into if you’re not famous.

So this is an attempted show of entrenched elite power in the face of technological helplessness, a conspicuous display of good taste, and a slap at the haters (Assange).

Petty? God, yes. But that’s what happens when you leak a man’s social security number and come between him and his iPhone.