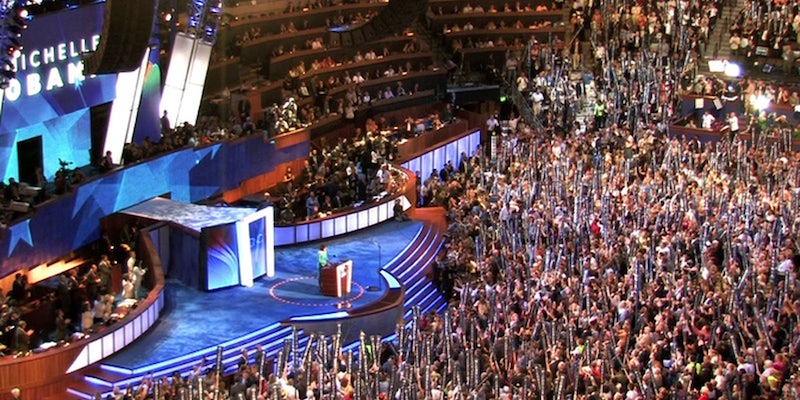 A party platform proposal from four Democratic representatives includes four out of the five principles of the Declaration of Internet Freedom.

As politicians gear up for the first round of elections since Americans rallied against the Stop Online Piracy Act (SOPA), four House Democrats are urging their party to formally adopt a stance of pro-Internet freedom—and it appears they’ve taken a page from the Declaration of Internet Freedom that activists drafted earlier this year.

“We strongly recommend ensuring the platform includes this or similar language: ‘The Democratic Party stands for global Internet freedom, the free flow of information online, a free and open Internet, and protection from online censorship and privacy violations.’”

Then, it names four principles that the party should espouse:

“Online free expression, privacy, openness and digital innovation will become increasingly prominent issues as more business, cultural and political activity takes place over the Internet. The Democratic Party should make it clear that these principles are a long-term priority for us, and that we are best equipped to champion these principles.

Whether intentional or not, they’ve named four of the five terms of the Declaration of Internet freedom: expression, openness, privacy, and innovation. Only the principle of access—”Promote universal access to fast and affordable networks,” in the Declaration’s words—is left behind.

Neither Democrats nor Republicans in Congress have a monopoly on Internet rights—in fact, their records are almost perfectly mixed. While SOPA was led by Republican Lamar Smith, its Senate counterpart, the Protect IP Act (PIPA), was introduced by Democrat Patrick Leahy. The infamous Cyber Intelligence Security Protection Act (CISPA) is led by Republican Mike Rogers; a similarly-criticized bill, the Cybersecurity Act of 2012, was defeated by Senate Republicans.

Precisely two members of Congress have openly pledged to fight for the Web by signing the Declaration, one from each party—Senator Ron Wyden (D-OR) and Representative Darrell Issa (R-CA).

This comes on the heels of the announcement that Reddit luminaries Alexis Ohanian and Erik Martin are taking a ten-day, campaign-style bus tour to promote Web freedom.

“Democrats and Republicans can’t seem to agree on anything. But there’s one thing no one’s really talking about that both sides should be championing: The Open Internet,” they said in an announcement.