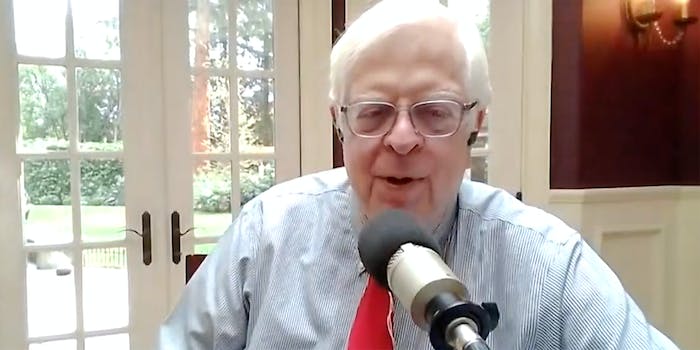 Prager claims he's taking hydroxychloroquine and ivermectin, but isn't willing to get vaccinated.

Dennis Prager has COVID-19. The eponym of right-wing indoctrination group, Prager University, announced his diagnosis on Monday. He’s the latest conservative anti-vaxxer to contract the virus.

On his show, Prager ranted against vaccines and claimed he’s been taking numerous medications instead, several of which aren’t effective at treating COVID.

As first reported by Media Matters, the 73-year-old also said he’s been trying to contract the deadly virus that’s killed millions worldwide, including a disproportionate number of senior citizens.

“It is infinitely preferable to have natural immunity than vaccine immunity and that is what I have hoped for the entire time,” Prager claimed. He said he’s been “constantly hugging” strangers and taking photos with them knowing he was increasing his likelihood of contracting COVID.

“Which is, indeed, as bizarre as it sounded, what I wanted, in the hope I would achieve natural immunity and be taken care of by therapeutics.”

He believes a majority of Americans should’ve gotten COVID because, in his opinion, natural immunity is superior to that created by vaccines. According to a recent blog by the director of the National Institutes of Health, the opposite is true: vaccines confer greater immunity.

Prager said he’s been taking hydroxychloroquine for a year and a half and has also been taking ivermectin. The Food & Drug Administration reports that neither is an effective treatment for COVID.

Prager said he’s received monoclonal antibodies and taken a variety of other remedies, such as zinc and azithromycin.

Later in the show, Prager theorized that former Secretary of State Colin Powell didn’t die of COVID, as Powell’s family has said.

Prager’s comments about Powell’s death came after a caller opined that Powell actually died of cancer. It’s been widely reported that Powell, who was fully vaccinated, was more susceptible to COVID due to his cancer.

“It sounds logical to me,” Prager replied. “If what you’re saying is true, and I have no reason to doubt it … that’s par for the course the entire time, if you have COVID and something else, they attribute your death to COVID to maximize the number of dead because honesty is not the policy of medicine in this time.”