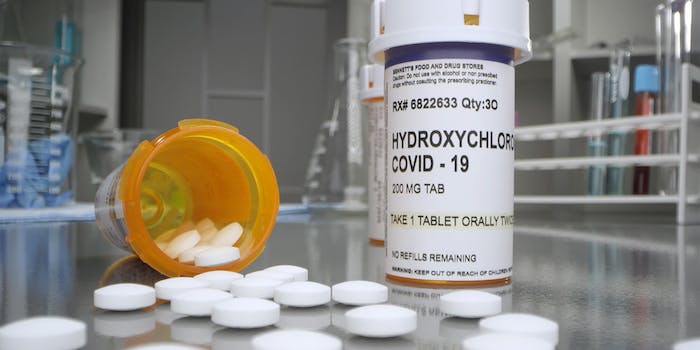 The accounts are dubious at best.

Why are anonymous Twitter accounts pushing the unproven coronavirus treatment hydroxychloroquine gaining traction? And why are they getting followed by and shared by some of the biggest names in right-wing media?

As such, more influencers in the conspiracy space are pushing experimental medication as a cure for coronavirus, and have suddenly become experts in epidemiology, disease tracking, and vaccine research. A perfect example is the shift from deep state conspiracy theories to those about coronavirus by ardent Donald Trump supporter and far-right author Jerome Corsi.

Since the coronavirus pandemic began, Corsi has been on a non-stop Twitter assault on the World Health Organization, China, social distancing, and anyone who thinks hydroxychloroquine is anything less than a magic bullet. Since May 13, Corsi has shared at least three tweets from an account with the name @niro60487270, which goes by “Hydroxychloroquine News.”

The “Hydroxychloroquine News” account appears to be little more than a clearinghouse for positive news stories and anecdotes claiming the experimental coronavirus treatment is the miracle we’ve been waiting for.

But because President Trump and the far-right media have also touted hydroxychloroquine as a magic bullet that the media and big pharma are suppressing, the account has found an audience with Trump supporters and coronavirus conspiracy theorists.

Since joining Twitter in March, the account has piled up over 19,000 followers by sharing stories about the medication’s effect on coronavirus. Some of the links the account shares are aggregated from foreign news sites of varying quality, and others are from U.S. news sites any time they share anything even slightly complementary toward hydroxychloroquine.

Corsi appears to be one of the more high-profile supporters of the account, though nothing in his background suggests any kind of aptitude or experience in being able to discern experimental medical treatments.

Corsi first came to prominence in the run-up to the 2004 election after leaving a career in the financial services industry to become a professional conspiracy theorist. He’s written books about the purported Barack Obama birth certificate conspiracy, who “really” killed John F. Kennedy, and multiple books about the supposed deep state coup attempt against Trump.

Since then, Corsi has been on a relentless quest to pump up HCQ as a miracle cure for coronavirus and has also taken every opportunity to attack Dr. Anthony Fauci, demanding the White House’s most visible physician on the coronavirus task force be indicted by Attorney General William Barr (indeed, the vast majority of tweets with the hashtag #IndictFauci originate from Corsi), accusing him of patenting strains of the disease, and comparing him to genocidal Nazi physician Dr. Josef Mengele.

“Hydroxychloroquine News” (who did not respond to a request for comment from Daily Dot) isn’t the only anonymous Twitter account with a stock photo avatar cranking out breathless stories about the supposed miracles of hydroxychloroquine that big pharma is keeping you from knowing about.

There’s @LukeMor19529310, who goes by “Hydroxychloroquine & Zinc | COVID-19 Game Changers” and joined Twitter in February with a still of model François Verkerk as a photo and a penchant for sharing stories from the original account.

And @Covid19Crusher (which has also been retweeted by Jerome Corsi) opened their Twitter account in April and has picked up 3,000 followers pumping out similar stories of great hydroxychloroquine miracles.

Why are these accounts doing this? Are they anonymous people who want to share the good news about a revolutionary medication? Do they want to build social media followings?

Giuliani himself has faved tweets about hydroxychloroquine and the conspiracy to suppress it.

Corsi and Giuliani aren’t the only top-tier, right-wing influencers to accuse “the medical establishment” of suppressing treatments for coronavirus in favor of isolation and panic that will hurt Trump at the polls in November.

Judicial Watch founder Tom Fitton, a major Trump supporter who constantly touts the vast deep state plotting against the president, tweeted to his nearly one million followers in early May that “#Hydroxychloroquine is still being suppressed by [email protected] media and Deep State.”

Robert Heering, the president of far-right, pro-Trump media network OAN has done the same thing, tweeting on the same day that Corsi was retweeting the “Hydroxychloroquine News” account: “President Trump, we’ve spoken with a doctor from Texas who has treated over a hundred patients with #hydroxychloroquine, with 100% success!”

Other pro-Trump media personalities in the Fox News world have promoted it as well—and the drug got its biggest boost yet when Trump claimed on May 18 that he had been taking it for about ten days as a preventive measure for coronavirus, despite there being no evidence it actually has any impact on contracting the virus.

There’s also not much evidence that it has any impact on the virus at all. Multiple studies have shown hydroxychloroquine is at best ineffective as a first-line treatment for coronavirus, and at worst, fatal in the extremely high doses needed to impact the virus. New French and Chinese studies confirmed that hydroxychloroquine doesn’t produce more positive results than a placebo, and the majority of the stories that the “Hydroxychloroquine News” account shares are anecdotal.

So far, the drug doesn’t look anything like the magic bullet its proponents claim it to be. But there is still potential in drug combinations that use hydroxychloroquine alongside other drugs. So the National Institute of Allergy and Infectious Diseases (NIAID), which operates under the National Institute of Health (NIH) umbrella, recently launched a 2,000-person clinical trial to study it in patients with moderate COVID-19.

“We urgently need a safe and effective treatment for COVID-19. Repurposing existing drugs is an attractive option because these medications have undergone extensive testing, allowing them to move quickly into clinical trials and accelerating their potential approval for COVID-19 treatment,” NIAID Director Fauci said in a statement accompanying the announcement of the trial. “Although there is anecdotal evidence that hydroxychloroquine and azithromycin may benefit people with COVID-19, we need solid data from a large randomized, controlled clinical trial to determine whether this experimental treatment is safe and can improve clinical outcomes.”

Yes, this is the same Dr. Fauci that Corsi has compared to a notorious Nazi human experimenter and has demanded he be indicted for unspecified crimes.

Despite the NIH pushing ahead with careful study of hydroxychloroquine, Corsi has continued to stump instead for its uninhibited use by the entire medical establishment.

It’s obvious why people desperately want hydroxychloroquine to be a miracle treatment for coronavirus. And with Trump having embraced the drug, it’s also obvious why his allies especially want it to be that miracle. But it’s almost certainly not, and if it is, finding out will require extensive further study and large-scale trials that might take years.

So as long as hydroxychloroquine has even the remote potential to end the pandemic swiftly, expect Trump’s allies to share anything and everything that shares that point of view—even an anonymous account with a stock photo avatar.