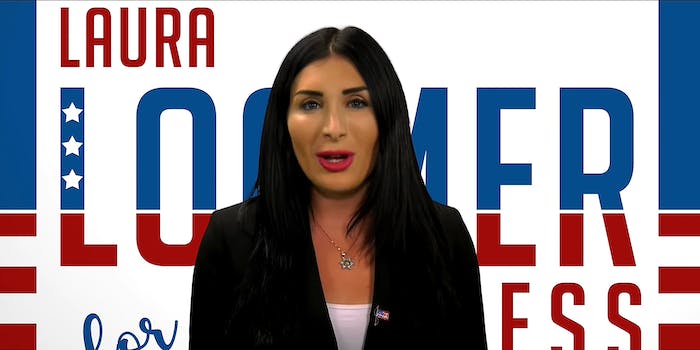 Laura Loomer hoped she’d catch COVID. Now she has it

She once said 'bad fajitas' were worse than catching COVID.

Far-right Islamophobic conspiracy theorist Laura Loomer once said that she hoped to catch COVID-19. She now says she has it—and wants you to pray for her.

Last year, Loomer posted that she wanted to catch the deadly virus to “prove to people I’ve had bouts of food poisoning that are more serious and life threatening than a hyped up virus.”

“Have you ever eaten bad fajitas?” she added, “That will kill you faster than COVID.”

Questions about the restaurants Loomer frequents aside, many thought that her take was irresponsible and nonsensical. The Centers for Disease Control and Prevention estimates that a mere 3,000 die from foodborne diseases annually in the United States. Last month alone, nearly twice that number died from COVID in Loomer’s home state of Florida, according to WPTV.

Now Loomer is complaining about the seriousness of her symptoms.

On Thursday, she said she was experiencing fever, chills and “severe body aches that made my whole body feel like I got hit by a bus.” She wrote that she took a COVID test and it was positive.

Loomer used her diagnosis as an excuse to again rail against the vaccine, calling it “unsafe and ineffective” on Telegram. (An overwhelming body of evidence has established that the vaccine is safe and effective.)

She also claims to be taking hydroxychloroquine and azithromycin to treat the virus. The Food & Drug Administration (FDA) has cautioned against taking the former outside of a hospital because it can cause dangerous arrhythmias. A clinical trial found that the latter, an antibiotic, has no statistically significant effect on the virus.

Loomer lamented that she couldn’t convince a doctor to prescribe ivermectin, the anti-parasitic drug that’s sent many people to the hospital in recent months.

She later posted a screenshot wherein her friend Milo Yiannopoulos offered to send her ivermectin, presumably left over from the stash he injected and then allegedly live-blogged an adverse reaction to it. The FDA has strenuously warned against taking ivermectin to treat or prevent COVID.

Loomer also said she’d taken monoclonal antibodies which, unlike the others, is an effective treatment for COVID.

As her symptoms continued, Loomer asked people to pray for her.

“Can’t even begin to explain how brutal the body aches and nausea that come with COVID are. I am in so much pain,” she wrote on Telegram. “This is honestly the worst part about it.”

People on social media immediately pointed out the irony of yet another person who downplayed the virus and refused the vaccine subsequently contracting COVID and getting extremely sick.

“Today’s round of ‘How it started……….how it’s going’ is brought to you by the letter Laura Loomer and the number COVID,” tweeted Amee Vanderpool.

Loomer has now taken to whining that people are being mean to her online.

“Trending on Twitter today because the Left is celebrating that I have tested positive for COVID,” she wrote on Telegram, one of few platforms where she isn’t banned.