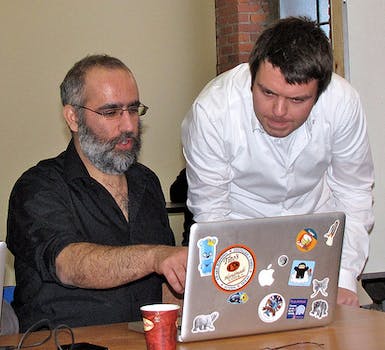 Code Year is a hit among wannabe programmers. But the online classroom doesn't have a place to hang out.

If your New Year’s resolution was to learn to program this year, you’re not alone. Hundreds of thousands of others had the same ambition to master coding computers. Just don’t expect to get to know any of them.

Since it formed in June, startup Codecademy hasn’t launched an educational initiative as much as kicked off a trend. Its 2012 project, Code Year, which sends a new lesson to aspiring programmers each week, has attracted 250,000 people—all without an advertising budget. However, there’s nothing social about this new community. Each student will take his or her lessons with the computer as the teacher.

According to cofounder Zach Sims, there’s no specific demographic for aspiring coders. Even though the company doesn’t collect personal data about users, he’s received emails and tweets about the project from people as old as 85 and as young as 10, and including the likes of Michael Bloomberg and the Washington Post’s Ezra Klein.

“I think the number itself is more notable than the individuals—we’re really creating a movement here,” he told the Daily Dot in an email.

Sims, who said Codecademy has not paid for any marketing, said he’d expected people to be interested in Code Year, but not in such big numbers.

“We expected this to be something people were interested in, but not quite to the scale we’ve seen thus far,” he said.

Twitter is abuzz with Code Year chat. There’s no official forum for students to discuss lessons, so Twitter users are beginning to make and publicize their own. People are crowdsourcing their questions and comments using the hashtag #codeyear. Additionally, a sizable number of librarians are likewise making #libcodeyear a busy topic.

Despite all this activity, Codecademy hasn’t given its users an official place to hang out. Can you imagine high school without the lockers and lounges? That’s kind of what the site feels like now.

Sims had no comment when we asked whether Codecademy would provide a space for community interaction in the future. The site displays user profiles and awards achievements for lesson completion, but there’s no way to interact with those profiles.

Where’s the fun in earning a “Coding Ninja” badge without being able to show off your skills?

Sims said that the deluge of users would certainly mean more perks, though.

“We’ll have more students to draw inspiration from and we’ll be designing an adaptive curriculum that works for them,” he said.