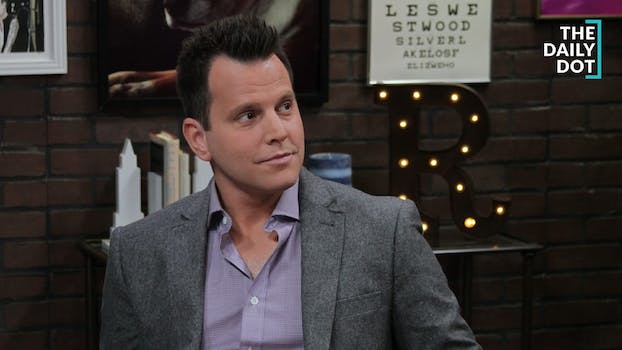 Dave Rubin is a liberal at war with progressives

Dave Rubin, founder of The Rubin Report, isn’t your typical gay Jewish comedian. A rising YouTube star, he has devoted himself to defending free speech, free ideas, and classical liberalism from a progressive movement he deems the regressive left.

He joins the Daily Dot’s Josh Rubin (no relation) for a conversation about his show, his interviewing style, and why his content is resonating with so many Americans.

[Joshua Rubin] Part of playing an audience is knowing how to needle that audience. To be able to pick out what the foibles are, what will get a rise out of them. How much of that plays into, you know, the political bed that you eventually settled into? Because you are not someone who anyone would describe as an arch conservative, but by the same token, you piss off liberals non-stop…and you enjoy it.

[Dave Rubin] I don’t know that I enjoy it, I’m just doing what I think I should be doing and what I think is right. As for pissing off liberals, I think there’s a certain…we could spend the next six hours trying to delineate the difference between what I think a real liberal is, a classical liberal, and what the progressives have become. That they are no longer for progress, they are for regression which is why the phrase regressive-left has picked up. But as far as needling people, it’s like, you know, my driving point really is that I want to sit down and talk to people, which is why I’ve had people all over the political spectrum. The needling part of it, you know, it’s funny. In the old days it would be like if you were an interviewer, you couldn’t share your opinions. That was sort of the idea or if you were an anchor on a news program, you couldn’t share what you thought, even though it was obvious to people always, I think. You could figure out what people think by the questions they ask or what they talk about. And I feel that I have no restrictions. I mean, I’m my own boss so I can give enough of my opinion and then at the same time, ask the questions that I think are important.

[Josh Rubin] You know, you’ve interviewed a lot of controversial figures. People like Paul Joseph Watson, people like Milo, obviously. What are the biggest push backs? Like when people…people get angry about you interviewing them. What are they getting angry about?

[Dave Rubin] Well, a certain amount of people just don’t want them to be talked to, period. So I would say the most hysterical, anger, or hate, or trolling, or whatever you want to call it that I get, is people that are saying, “You just talked to them,” in the first place. “They don’t deserve a platform to be talked to.” Now that premise I basically, totally disagree with because if you’re doing something relevant, so Milo, for example, is a good example of this. He obviously is relevant in the cultural conversation. You may hate everything he says, and by the way, I disagreed with him on camera about many, many issues. But he was obviously and is obviously doing something relevant. So for me to just say, “Well, I’m not going to talk to this guy because I disagree with him on this or this or this,” I don’t know what the purpose of and interview show would be if that was the case. So I try to talk to people…and look, people want me to ask different…sometimes they’ll say, “You’re not combative enough,” or, “You didn’t ask this question or that question.” My personal interviewing philosophy is that if you ask the right question, you’ll be able to see the line of someone’s thinking and the longer that they talk, maybe you’re tricking me into doing it right now, is that they eventually will tie the noose around their neck. And you can see this. And I see this sometimes when people aren’t really sure of what they’re talking about or when they aren’t really telling the truth or being honest with themselves, at least, they start talking in ways that it’s very obvious that they don’t know what they’re saying. So I’m a big believer in letting people speak and then letting… I don’t think my audience is idiots, also. Which I think on television, basically, everybody thinks that their audience is idiots, which is why they feel the need to yell. You say something I disagree with, I got to yell at you and prove I’m right and everyone’s got to yell and go back and forth and we have to have 18 people Skype’d in at once and all this stuff. And I’m a just believer that if you have a conversation, that at the end of the day, the audience can do a little research and figure out what’s right.

[Josh Rubin] A lot of it feels like the recreation of Twitter on television. And every time television tries to take, “Well this is working on the web, let’s make it TV,” it doesn’t work.

[Dave Rubin] No, and I think that’s a great way of describing it. Even just in the last couple days, I think it was yesterday, I saw Chris Hayes on MSNBC. He said, he Tweeted something like, “I don’t understand YouTube culture,” or something like that or, “YouTube culture makes me feel old.” I think that was the exact quote. And I thought, you guys are all missing it. You’re all so in this institutional thing where you’re so close to the people with power and there’s so much collusion between the media and the politicians, and everybody’s married to this one or goes to parties with this one, or worked with this one here or was a lobbyist here or…all of this stuff that they can’t see it. And there are huge problems with internet culture and getting your news only from online because, at the end of the day, I don’t want people only to trust me. I’m doing the best that I can, but you got to find now there’s so many ways to get information. You got to find people that you trust, and hopefully you’ll find a wide array of people.

[Dave Rubin] So it’s a bunch of things. You have a certain subset of people that actually do want their ideas challenged, and those are the quietest people. And I like to think that’s mostly what I’m bringing to my audience. That there’s a group of people that actually do want to hear both sides, that want to build some bridges, and all that stuff. So I think I’ve done a pretty decent job at that. For sure, the bulk of what gets clicks and the bulk of what gets plays is just if you siphon off into your base and you just rant and rave and scream. But by the way, that’s not new because Rush Limbaugh’s been doing that on the radio forever and all of these, you know, all of the networks. There’s a reason that MSNBC leans one way, right? They lean forward or maybe backward, but they are leaning one way and Fox leans a different way.

[Josh Rubin] Aren’t you feeding into the same problem that you say that you’re trying to solve when you coin the phrase regressive-left? And you paint a giant, broad brush across people that feel a certain way? That that is not lending itself to discourse about finding out like, have you had that social justice warrior as you often refer to them on to talk about that and to try to get behind, you know, the issues?

[Dave Rubin] Well, first off, just for the record, I didn’t coin the phrase, it was Maajid Nawaz. So I want that to be known because people credit it to me and I…

[Josh Rubin] In many ways, you were the one who was amplified.

[Dave Rubin] Yeah, yeah, yeah. I’ve definitely helped push it, but for the record, he came up with the phrase. No, I don’t agree with the premise of the question because I’m talking about a very specific subset of people. The progressive movement that is supposed to be for progress, right? It sounds good, so people think that it’s good and, “We care about minorities and we care about gay people and black people and Muslims,” and all of these things. In a real sense, that sort of collectivism actually is bigoted. While they at the same time they’ll tell you that everyone on the right or everyone that’s not them is the bigots. But they’re the ones that are judging everyone on their immutable characteristics constantly. And what that does is, it eliminates the individuals. So if you’re an ex-Muslim, or you’re a black person who doesn’t think that you have to be a member of the Democratic Party, let’s say, or a series of other things. If you’re a trans person who happens to vote more on taxes than you do on LGBT issues or whatever, you eliminate the individual. So the phrase regressive-left, first off, I do use it less now because there were so many people thinking this idea, and they couldn’t quite…they couldn’t quite put it all together. So for the year that I was really doing that, I think we helped a lot of people…a lot of people saw this problem on the left and couldn’t quite figure out what it was or put a name to it or something like that. The reason I think that the regressive left is a bigger issue is because they have all of the institutional power right now. So for example, I’m going to speak at UT tonight and if on any given day at any college across the country, they brought on the most Marxist, leftist, anti-capitalist speaker who was talking about destroying the United States and wanted to take down the place from the inside, all that. Whatever it was, they would have some people show up and that would be it. If Milo showed up or someone…or even Ben Shapiro, just a standard conservative, whether you agree with him or not. But a guy who basically just holds what are thought of as standard, conservative views. If he shows up, they try to silence him. So this inherent problem where professors, also, and this is what I get every time I go to a college, that this stuff is being taught. This oppression Olympics is being taught and because of that, these are the minds that are going to leave us for tomorrow. Does that mean I agree with all the stuff coming out of the right? Of course not. But the idea that the white supremacist or something, or the Pepe the Frog people, have the influence that actually academia and Hollywood and media have, which are all a lot of these regressive ideas, I think it’s just not even on the same playing field.