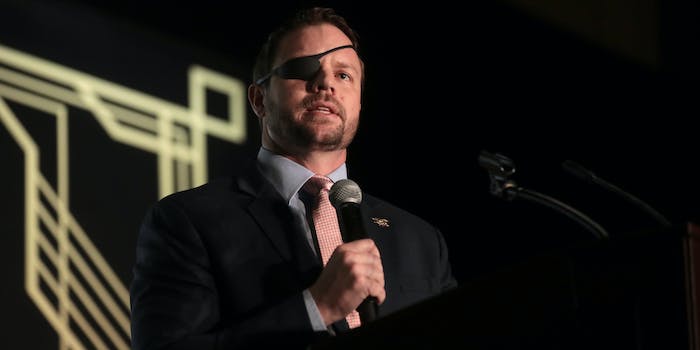 He spoke out in favor of action from Congress.

In the wake of back-to-back mass shootings in El Paso, Texas, and Dayton, Ohio, which killed 29 and injured at least 50 more, one of the most prominent voices in the GOP spoke out in favor of gun reform.

In disbelief at another tragic shooting. Tara and I are praying for the victims and their families. Thank you to the Dayton police who took out the coward who did this in one minute. Houston stands with El Paso and Dayton as their communities heal from these senseless tragedies.

In wake of the standard Republican “thoughts and prayers” line, which is frequently trotted out in the wake of these shootings, Crenshaw spoke about the need for “maybe” having “red flag” laws, which can help disarm people who are a danger to society before they act out.

The solutions aren’t obvious, even if we pretend they are. But we must try. Let’s start with the TAPS Act. Maybe also implement state “red flag” laws, or gun violence restraining orders. Stop them before they can hurt someone.https://t.co/2G2pZSWaF1

Ever since the shooting in Parkland, Florida, that killed 17, red flag laws have become a way to restrict access to firearms for people who are a danger to themselves or others. Red flag laws allow people to petition the court to take away someone’s weapons if there is a reasonable concern.

Crenshaw’s endorsement of “red flag” laws wasn’t even that full-throated, saying “maybe” we should let states implement them (some already have).

But even that tepid claim was too much for people, who were upset Crenshaw would so much as float the idea that gun violence is a problem that could be worked on.

“Think with your mind…not emotion,” one user tweeted at him.

“Don’t give one inch,” another wrote.

red flag law allows anyone to flag me and I loose my constitutional right without due process. Think with your mind…not emotion, please.

Don't give one inch Rep. Crenshaw, the left will slaughter us. Rebuilding mental health institutions is where we can start. We need you to fight for 2A.

Crenshaw however, is still completely in favor of people owning AR-15-style rifles, the kind of semi-automatic weapons that mass shooters frequently use.

Crenshaw recently published a video on the Daily Caller about AR-15s, debunking a common argument against the rifles, arguing that they are necessary for “self-defense.”

His argument? Because most Americans don’t receive great training after getting a gun—a problem that could be rectified by passing a law requiring firearm training when purchasing a weapon—they should own a gun that makes it much easier to fire and hit a target.

When poorly trained with a gun, Crenshaw says, you want the ability to shoot as accurately as possible.