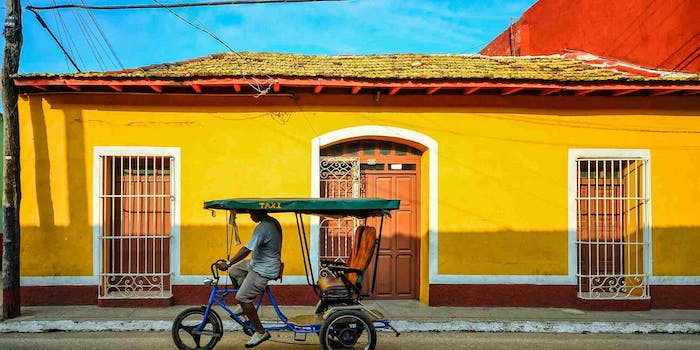 Cubans are desperate to get online, but it’s a slow process

The Cuban government dropped a bombshell Thursday by publicly announcing an intent to increase Internet access to its citizens. It’s a promise that’s been in the works for a while, though it progressed slowly. In 2014, Google president Eric Schmidt visited the island and subsequently his company made a proposal, the details of which have not been revealed, to help the country’s connectivity efforts. Last week, Schmidt’s company sent an entire team to Cuba.

It apparently went well. On Thursday, Luis Manuel Diaz Naranjo, the chief spokesman for state telecom ETECSA, told the Juventud Rebelde newspaper that the Cuban government would shortly be opening up 35 Wi-Fi hotspots across the country, including five in the capital Havana. Each hotspot will provide access to between 50 and 100 users at a time, at a rate of 1 MB per user per second.

Naranjo also announced that the official Internet access rate would also drop to $2.00 per hour, according to Reuters, though given that the average monthly wage in Cuba is $20.00, and that the maximum number of people served by this scheme would be 3,500 out of a population of over 11 million, this is still far from open access.

Cuba has one of the lowest Internet connectivity rates in the world, at approximately 3.5 percent. When Cubans do wish to go online, they have to pay $4.50 per hour to sign at one of the country’s official Internet cafes or twice that to access the Web in a tourist hotel.

But the desire to get online is strong. One popular alternative at Cubans’ disposal is to visit the U.S. Interests Section, where they’re allowed to access the Internet over American diplomatic lines.

Cubans have also been known to create “artisanal” Wi-Fi networks, home-grown, domestic networks designed to allow citizens to play games and share television shows, among other things, though they’ve long been subject to government crackdown. As long as a decade ago it was not unknown to see friends and associates linking their routers together to create informal networks.

If free speech is a human right, more than just a political one, you could point to instances like these, in which the desire to connect is married to a native inventiveness and willingness to experiment. Certainly this is part of the pressure building up on the Cuban government to provide more real access to the Web.

Although the data necessary to evaluate the Cuban filtering regime—what users are allowed to look for and at—is scant, the country is a fixture on Reporters Without Borders’ Internet Enemies list.

As to home Internet access, as recently as last March, when rumors about the imminent home connections abounded, ETESCA denied there were any such plans, according to the Havana Times.