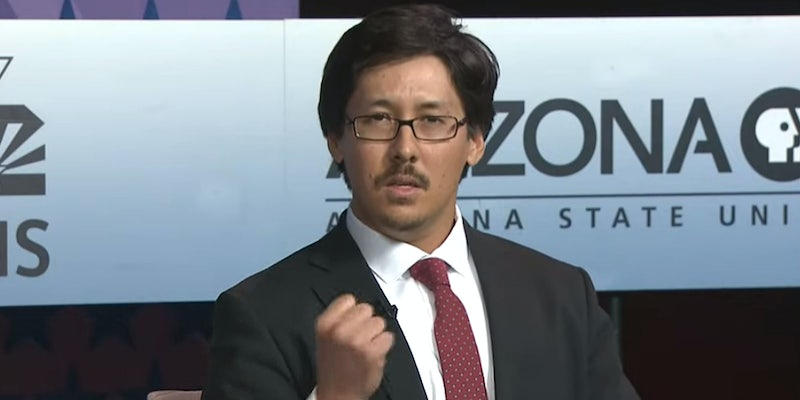 The man accused of being QAnon struggled to make sense during his first debate.

QAnon guru Ron Watkins, who is currently running for Congress in Arizona, is being mercilessly roasted online over his performance during a primary debate on Wednesday with his fellow Republican candidates.

Appearing alongside candidates Walt Blackman and Andy Yates, Watkins attempted to convince the state’s voters why he should be chosen to represent Arizona’s Congressional District 2.

But as soon as his opening remarks began, many argued that Watkins’ not only lacked charisma but was painfully awkward as well.

Numerous remarks from Watkins, such as his claim of being a computer scientist, were quickly scrutinized. Watkins is best known for running the notorious imageboard 8chan and is believed by many to have been responsible for the “Q” persona that launched the QAnon conspiracy theory.

Watkins also bizarrely claimed to be fighting for “free speech rights in the private sector” before ending his statement with a strange fist gesture.

As the debate continue, Watkins awkward demeanor and hyperbole only intensified. While discussing the U.S.-Mexico border, Watkins claimed that during a recent trip he was able to scare off a group of human smugglers, often referred to as coyotes, by simply staring them in the eyes.

In arguably his most embarrassing moment, Watkins launched into a subdued and monotone diatribe against the war in Ukraine by suggesting that President Joe Biden’s decision not to support the Keystone Pipeline was what caused Russian President Vladimir Putin to invade.

After having his remark totally debunked by Blackman, Watkins simply conceded that his entire thesis was false.

When confronted over the Jan. 6 Capitol riot, Watkins stated that he would have asked Trump to tell his supporters to stand down and went on to condemn those who engaged in criminal activity.

Watkins further alleged that “millions” of Trump supporters were in attendance and that “99.99%” did not engage in wrongdoing. The moderator of the debate quickly confronted Watkins over the wildly exaggerated numbers.

The candidate also denied having any ties to the QAnon conspiracy movement.

The performance was received so poorly that even Watkins’ most loyal followers on Telegram couldn’t stand behind it.

“I think Ron has been dupping us this whole time,” one user wrote. “He made a fool on that stage, I would hate to see what would have happened on a national stage. I think it’s time to go back to your websites Ron.”

Over on YouTube, however, comments under the debate’s official live stream were flooded with praise for Watkins.

“Ron is the one who needs to win this,” one commenter said. “We’ve had career politicians and look what our country has turned into. No more! Only America First patriots from here on out.”

The debate comes not long after Watkins’ quarterly filing with the FEC revealed that nearly all of his campaign donations had come from himself. Not only that, Watkins stirred outrage among his supporters for spending over $21,000 on AirBnb rentals.