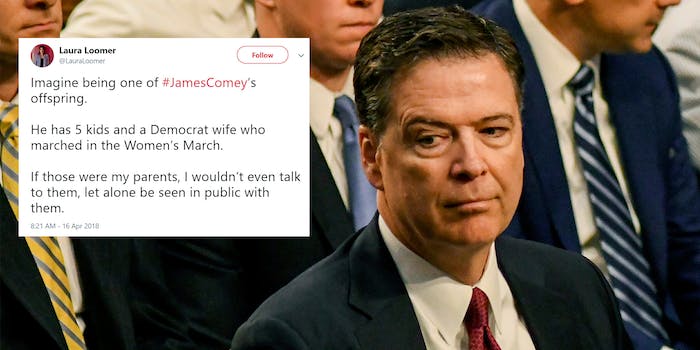 The right's loudest voices are angry.

Former FBI director James Comey—who has become a figurehead of the anti-Trump movement ever since he was fired by the president—earned praise from the left for his interview with George Stephanopoulos last night.

In it, he called President Donald Trump morally unfit to lead the nation.

I have serious differences with James Comey over his handling of the email investigation, but on two points, I am in solid agreement: Donald Trump does not reflect the values of America and is morally unfit to be President.

However, for those on the opposite ideological spectrum—especially those on the far-right—the Comey interview was everything that is wrong with both the left-leaning media and those in the highest echelons of government.

Wow, .@Comey puts down the American people for voting for @realDonaldTrump like he is the authority on morality. FBI is under investigation 4 HRC and Trump Russia investigation. It appears Russian chaos campaign aided unwittingly by Comey, Brennan, Clapper, McCabe & others – sad.

Comey, who has been accused by both sides of being petty in his book, A Higher Loyalty, was blasted for continuing to talk about Trump’s appearance with Stephanapolus.

Comey: talking about Trump’s hair, says he looks like he was wearing tanning goggles— this is Comey’s impression? Got to say, how incredibly weird for a former FBI Director…

Comey’s response to Russia having compromising material on President Trump also was maddening to many as he vacillated—simply saying it’s “possible”—leaving a major issue extremely open-ended.

By excoriating President Trump’s character and then speculating that he is compromised by an adversary, does the former disgraced FBI Director realize that he is advancing a narrative that plays right into the hands of the Kremlin? https://t.co/Ynkr9wMPH9

Some also felt Comey brazenly admitted to illegal acts in the interview, which should be prosecuted.

Hey Jeff Sessions how much more @Comey bragging that he committed crimes do we have to endure before he gets ARRESTED??
This is unbelievable! I guess crime does pay!

That was a line echoed by the president this morning.

Sean Hannity, the most prominent conservative media personality of the Trump movement, was particularly upset about the line of questioning Comey received, believing it to be biased, and calling Stephanapolous an inappropriately sympathetic interviewer.

Who Comey voted for was another line seized on by those on the far-right, especially when Comey revealed that his children would have liked to have seen Hillary Clinton win.

Despite being enraged by it, conservatives also simultaneously dismissed it after it was over.